Can Arsenal challenge for the Premier League title this season? 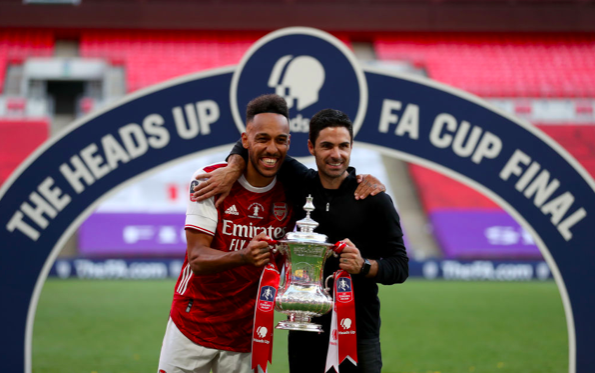 Question marks were raised over the appointment of Mikel Arteta as Arsenal manager in some quarters, with many people doubting whether the Spaniard had the experience to guide the Gunners back to its glory days. Since then, the FA Cup and the Community Shield have been won in what has been an encouraging start to life in management for the former Gunners player.

A new season is firmly underway now, though, as Mikel Arteta looks to stamp his authority further on his new-look Arsenal side and get the North London giants back challenging for European and domestic honours once again – something his predecessors struggled with. Could this season be the campaign when the Gunners mount a title challenge once again? Fans are certainly encouraged by the team’s start, but a start is all it is.

Countless times in previous campaigns, Arsenal have tailed off just when fans thought the team was returning to its past glories. A fragile defence, a dismal goalkeeping display or a lack of steel in midfield have been blamed, alongside the dismay at the club’s hierarchy, which is still there. But now, the focus is on the future, and those past frustrations are, largely, in the history books, although Stan Kroenke is still on the receiving end of numerous angry social media posts or offensive chants.

Despite this, Mikel Arteta is building an Arsenal side capable of challenging once again. When we were all sitting on our sofas playing slots UK at www.casino.com and watching Tiger King on Netflix waiting for the football season to restart, Pep Guardiola’s former assistant at Manchester City was plotting Arsenal’s return to the big time. Transfer targets were named, coaches were recruited, and in Pierre-Emerick Aubameyang’s case, vitally important contracts were signed.

Now, with a clear identity and a way of playing that the players have well and truly bought into, Arsenal are backfiring again. Despite the new Premier League season being in its infancy, the signs are encouraging for many fans of the club, and that is largely down to Arteta and what he has implemented.

On the pitch, the team is more structured. The defence, which has been an issue for a while now, has some additional stability thanks to the signing of Gabriel from Lille, alongside the maturity shown by the likes of Rob Holding. This, coupled with the fact that the midfield is providing more cover and protection in front of them, has led to a more compact and solid-looking Arsenal side already this campaign.

A distinct lack of steel and a real frailty has cost Arsenal in recent times and arguably led to the demise of Arsene Wenger, who refused to see past it as his Arsenal team showed its naivety far too many times. Arteta, with a fresh outlook on things, clearly saw this as an area that needs addressing. All successful football teams are built from the back, which is what Arteta sought to fix straight away.

With a solid base now established, Arsenal have the foundations in place to mount a serious title challenge this season. Playing open and expansive football was never a problem for the Gunners, but grinding out results and keeping clean sheets was.

Now, with a new-found steel added to the club and the additional quality in midfield in the shape of Thomas Partey, Arsenal finally have the required ingredients to challenge at the top once again. The defence is more stable, the midfield has been bolstered, and with the likes of Willian, Aubameyang and Pepe in attack, Arteta’s organised Arsenal are back.