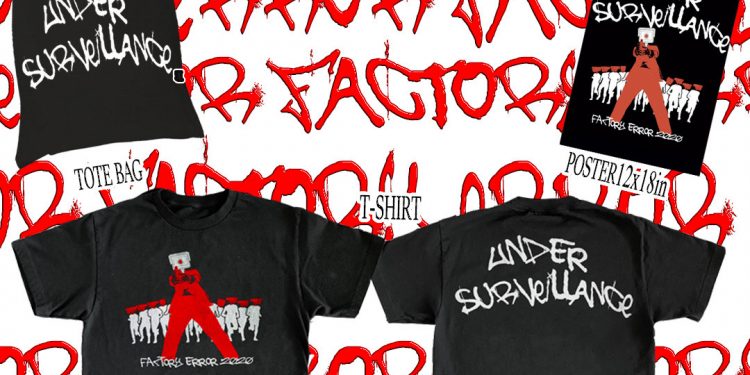 History is repeating itself, yet again, in the United States of America. “Land of the free” does not seem to apply to all Americans anymore. There are several injustices that this nation has ignored or turned a blind eye. Now, more than ever, the country needs to be enlightened, unselfish and unified. Only then will America find and merit peace. Factory Error Founders Ashton Smith and Brayden Russell are part of this movement. They are proven leaders to the community they have been building. Their message has always been to embrace each other’s differences because individuality is a priceless possession. Presently, their message is resonating stronger. Smith and Russell are addressing all injustices and helping their customers realize the truth.

Q: Factory error is a company that seeks to create a community where people feel understood, welcomed, and united by factory error merchandise. How will you continue to accomplish this during today’s climate, where the world feels divided?

A: As the fans should be aware, we just dropped afundraising tee, which will be available until June 6th, to donate to the bail fund and memorial fund for those who have fallen to injustice and corruption.

Q: What is factory error doing to promote and educate the world on #BlackLivesMatter?

A: As stated in the last answer, Factory Error is working on fundraising and bringing awareness through our platform, including as much information as we can find and posting via Instagram story.

Q: Do either of you care to share personal stories/things you have witnessed that made you who you are? anything that made you realize that the world was far from equal?

A: There are too many events for me to pick one. It wasn’t too far into my childhood that I witnessed mistreatment and inequality, which I never agreed with. I disagree with everything that is NOT fighting for the common goal all humans need, which is equability and justice for those unjustly taken from us.

Q:  Factory Error’s next launch on June 5th, which has been in the works for over a month resonates with the current times. Can you explain how you came up with the “under surveillance” merchandise?

A: When coming up with the concept for under surveillance, I wanted to prompt people to open up their eyes to everything going on in the world, and that nothing you do is truly private anymore. The recent events have opened a lot of eyes. Unfortunately, the death of George Floyd was the cause of the uprise and realizations. Still, it has been a long time since the mainstream media became a secondary source of news, and finally the people are doing research themselves to see the real injustice in the United States and the world.

Q: A coincidence that the current state of the world aligns perfectly with your next message. Do you guys believe that you saw the problem beforehand and that it was only a matter of time before another tragic, injustice murder occurred?

A: Yes, I have been aware of the problems. If anyone wasn’t aware, then you live in a shell or are ignorant and avoiding the truth. History is repeating itself and the overall message and movement haven’t changed. This time, as long as the message gets across, I think change is inevitable. Considering everyone is uniting right now throughout the world, it’s nearly impossible not to be heard.

A: Think for yourself and don’t be led by the media, propaganda rules America.

Q: What can your customers expect from your company this month or this summer?

A: They can expect us to still be a full force voice regarding anything going on in the world. We are who we are and we are not ashamed for what we stand for and neither should our customers. Be unapologetically you!

Ray Mills, The Front Runner of Justice and Success in the Business World