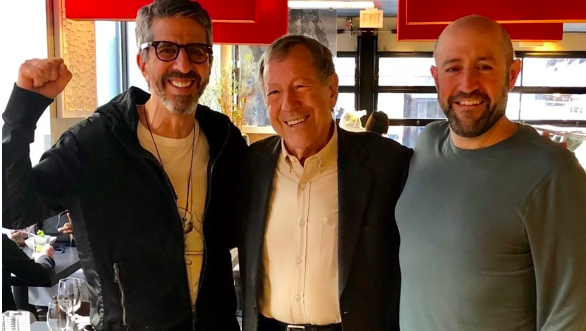 Every year for American Independence Day, we watch and let the words that President Thomas Whitmore (Bill Murray) so passionately and eloquently delivers to humankind in the 1996 film Independence Day sink into our heads and are shared across social media:

… “In less than an hour, aircraft from here will join others from around the world, and you will be launching the largest aerial battle in the history of mankind. Mankind. That word should have new meaning for all of us today. We can’t be consumed by our petty differences anymore. We will be united in our common interests. Perhaps it’s fate that today is the Fourth of July, and you will once again be fighting for our freedom. Not from tyranny, oppression, or persecution… but from annihilation. We’re fighting for our right to live. To exist. And should we win the day, the Fourth of July will no longer be known as an American holiday, but as the day when the world declared in one voice: We will not go quietly into the night! We will not vanish without a fight! We’re going to live on! We’re going to survive! Today we celebrate our Independence Day!”

But do Americans truly understand what they are saying? What they are supporting? What Murray’s character in the film wanted every aircraft pilot and fighter gathered around him to hear?

Of course not. How else could you explain the ugly divide that not just American culture portrays in 2020, but cultures abroad?

The immortal declaration that was penned by Thomas Jefferson in 1776 which became the foundation for the U.S. Declaration of Independence now surfaces when we ask ourselves what it means to be “equal” in today’s era of rising authoritarianism, social injustice, racial inequality, and tackling a global pandemic that has brought out the many, many colors of our world’s leaders when addressing our public.

Decades later, we now start to question whether our Founding Fathers truly meant to leave “women” out of their doctrine. Whether “inequality” was defined by the infrastructure of society at that time. But there’s one thing that they would most likely all agree on today.

It is July 2020. And our world is ass backwards. Our country is more than divided. It’s broken, weakened by a global pandemic, social injustice, racial inequality, and gender discrimination that has been encouraged and supported by our world’s leaders and state actors.

We look to global leaders and human rights activists such as Amal Clooney, Malah Yousafzai, Bono, Irwin Colter, among many others and wonder how one change could send a rippling effect throughout the world.

It is because of the legacy of individuals like Raoul Wallenberg and Nelson Mandela and the ongoing legacy of today’s activists who honor them while fighting today’s battles that we have hope. Because as it stands right now, some of the world’s leaders, who swore an oath to protect people are in fact oppressing and hurting them. And in the words penned into parchment by Thomas Jefferson, when any government becomes too powerful or corrupt, it is the peoples’ responsibility to overthrow and remove those from the seats of abused power.

This is why it’s time to step up and the reason activists like Colter and his former law student and current board member Jay Rosenzweig have taken the global fight on human rights headon.

Colter, Canadian international legal scholar, former parliamentarian, and former Attorney General and Minister of Justice of Canada, has a portfolio that stretches to infinity’s bounds. Having founded the Raoul Wallenberg Centre for Human Rights.

Colter remains one of the world’s most vocal international proponents of the responsibility to protect doctrine for the prevention of genocide. And that includes his work to bring Nazi war criminals to justice.

In 2000, Cotler was appointed special advisor to the International Criminal Court. As an international human rights lawyer, Colter has first-hand experience bringing change to the world, having represented Nelson Mandela, Jacobo Timerman, Saad Eddin Ibrahim, and Natan Sharansky, among many others. He currently represents Saudi blogger Raif Badawi, Venezuelan political prisoner Leopoldo Lopez and Iranian cleric Ayatollah Boroujerdi, among others.

And that’s where his protege Rosenzweig, a Canadian entrepreneur, visionary, and trained lawyer comes in. Rosenzweig found a life-changing mentor in Colter, and used his own passion for law over the years to become a leader in executive fulfillment, talent strategy, and the fight for women’s equality.

Cotler and Rosenzweig recently joined up with Jason Flom, founding board member of the Innocence Project, on the Jens Söring case. Jens’ story is a tragic one, a story of an innocent man locked up in prison for 33 years for a crime he did not commit. Thankfully, Jens was finally granted parole, and is now a free man. Another powerful example of the importance of cross collaboration to fight injustice.

As for Rosenzweig’s individual efforts to advocate for gender equality, his company, Rosenzweig & Company, through its fifteen years of producing the Annual Rosenzweig Report, continues to fight for women’s rights, releasing data on women in the upper echelons of the Canadian corporate world, while simultaneously taking into account gender disparities in the workplace globally.

“At the Raoul Wallenberg Centre for Human Rights, we are representing the Nelson Mandelas of today all around the world,” Rosenzweig said in an interview with Luxe Beat Magazine’s Andrew Rossow, a criminal defense attorney himself.

“We are combating hate, antisemitism and racism in all its forms. We speak out to prevent current and future genocides. We work to protect democracy around the world at a time when we are witnessing a global resurgence of authoritarianism. And, of course, women’s rights are an important cause for us.”

Rosenzweig’s legacy and reputation continues to attract multi-billion dollar corporations to help be a driving force to fuel innovation on a global scale.

Obtaining dignity, respect, and advancement for women is not just a woman’s issue, it’s a human rights issue,” celebrated activist and actress Alyssa Milano shared in her testimonial to the Rosenzweig Report.

“It requires including men and welcoming their help to change behavior and perceptions. Jay Rosenzweig, through The Rosenzweig Report and his support for the #MeToo movement, shows that men can be important and effective allies and advocates for real change.”

Dr. Ali AlSaqoby ( علي الصقعبي ), a Kuwait based Dentist is Impressing the World with his Top-Class Athletic Ability, Dentistry and Charisma