India Vs New Zealand: ICC World cup, why it is important for Kohli 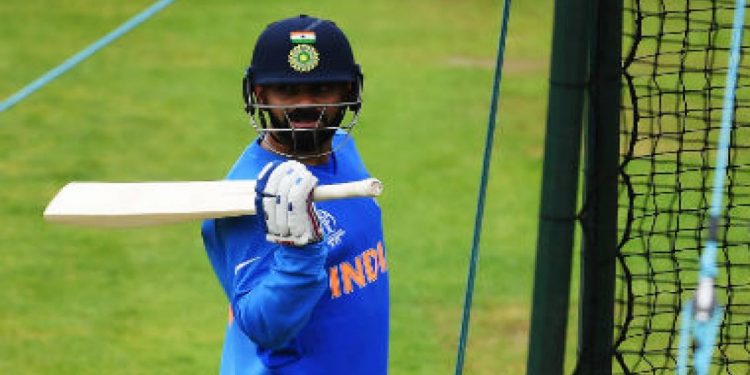 India will face New Zealand in their third match in the ICC tournament. The Indian team opener Shikhar Dhawan is suffering from a hairline crack. K L Rahul will be opening the batting order with Rohit Sharma. And Kohli will be handling the third spot. But it leaves a huge gap in the fourth position of the batting order.

The absence of a player, will increase the pressure on the captain Virat Kohli. India performed well in the last two matches against South Africa and Australia, two very strong sides.

But with a weak middle order, against one of the most potent pace attacks of the world, Indian side seems to be in a bit of trouble.

New Zealand’s side had Matt Henry, Lockie Ferguson and Trent Boult, as pace bowlers. This elevates the pressure on the Indian Captain. It is not just the absence of Dhawan but there are many records which Kohli will set if he plays well in this match.

If he scores 57 runs versus New Zealand in India’s match against New Zealand in Nottingham then he will become the fastest batsman to have scored 11000 runs in ODI cricket.

Currently he is at 10943 ODI Runs. He took less than 11 years to complete the runs which is a commendable feat in itself. He is the fist one to ever do so.

He will also become the third Indian Cricketer to have scored 11000 runs in ODI cricket. The other two Indian players are Sachin Tendulkar and Sourav Ganguly.

If he plays well in this ICC World cup then he will hold the 8th position in the all time ultimate score board of highest ODI Runs.

Young Men are risking their health by using Anabolic Steroids