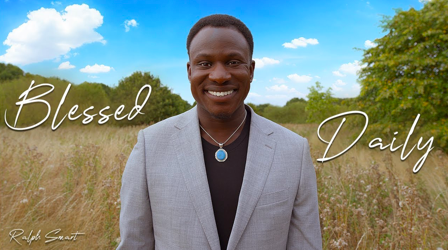 If you spend any amount of time on YouTube – particularly if you have an interest in self-improvement, yoga, or veganism – you’re likely to have already heard of Ralph Smart. Ralph is one of the most popular motivational and self-help vloggers out there, with an impressive 244 million views and 1.7m subscribers on his channel, Infinite Waters (Diving Deep).

Although Ralph’s vlogging and motivational speaking have made him hugely successful, it wasn’t a calculated decision on his part to begin an influencer’s career in order to achieve status and wealth.

Ralph was born in London to parents originally from Sierra Leone. He completed a joint degree in Psychology and Criminology at the University of Westminster, and then took on various jobs – including ones in retail and counselling, as well as working in a school with people with autism, bipolar disorder, and ADHD.

A few years into his counselling work, Ralph suffered from a sudden bout of ill health and was hospitalised for a month. It was during this time that he decided to change his life, and to dedicate himself fully to improving himself and helping others live their best lives – “Become your greatest version”, as one of his catchphrases neatly captures the values behind his ideas.

Ralph has travelled around the world, reaching people in five continents and involving himself in helping them achieve their full potential. He joined YouTube in 2008, and has since posted countless videos addressing a whole breadth of issues that a lot of us might be struggling with every day. From relationship advice to food and nutrition and more philosophical and metaphysical matters, everyone’s bound to find something relatable on Ralph’s channel. This is especially true if we consider the sheer amount of content Ralph makes available for free – the Relationship Advice category alone holds around 1,700 videos!

As well as self-help and motivational talks, Ralph posts other content to help you on your way towards achieving your full potential. Inspirational music videos, meditation sounds or frequencies, yoga and nutritional content – all of these can be found on Infinite Waters. In fact, Ralph’s channel was featured on BuzzFeed’s list of top 5 most subscribed yoga channels on YouTube.

Ralph’s strides in healthy living and the positive influence he has on others in this area have also not gone unnoticed. For over a decade and a half now, Ralph has been practicing a vegan diet and a clean-living lifestyle, as well as regularly sharing the benefits of both with his audience. In 2017, he was featured in the Plant Based News’ list of top 50 most influential vegans.

The upbeat, positive vibe that Ralph radiates in his videos is almost enough to uplift your mood – he has a charming, easy-going way of getting his message across, and you’ll be hard-pushed to find a single second among the thousands of hours of his content when he’s not smiling in an open, genuine way.

In addition to daily updates to his vlog, Ralph has also published three books: a self-help guide titled Feel Alive, the sci-fi novel with metaphorical elements Tryathon: The Love of a Galaxy, and The Book of Infinite Quotes – as the title suggests, a collection of inspirational words to get you on your way to becoming your best self.