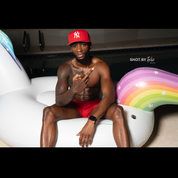 The music industry has so many artists nowadays. Yet, sometimes you find that special artist that not many have seen before. King Nasir is the diamond in the rough from New York who has just come to the scene recently with his debut releases.

Going from the business world to the music world has been an easy transition for the artist, as he’s always been able to succeed with whatever he begins. Already starting a successful clothing line, King Nasir has built the framework of a successful mindset that he has now replicated for music. Now he’s released two successful singles that are currently shaping the artists sound to his growing fanbase.

Momentum has clearly been on King Nasir’s side lately, and he has no other plan than to become a top contender in the music industry. To attack this goal, King Nasir said he is currently working on two EP’s: one for himself and one for an artist he’s working with named Jay Flaco. So far, he has already collaborated with Jay Flaco on his most recent release “Fade”.

With his history of turning opportunities into realities, King Nasir has high chances of becoming successful as an artist. With the drive paired with talent, the New York native could very well be one of the next big names.

4 Reasons Why You Should Rent a Luxury Car