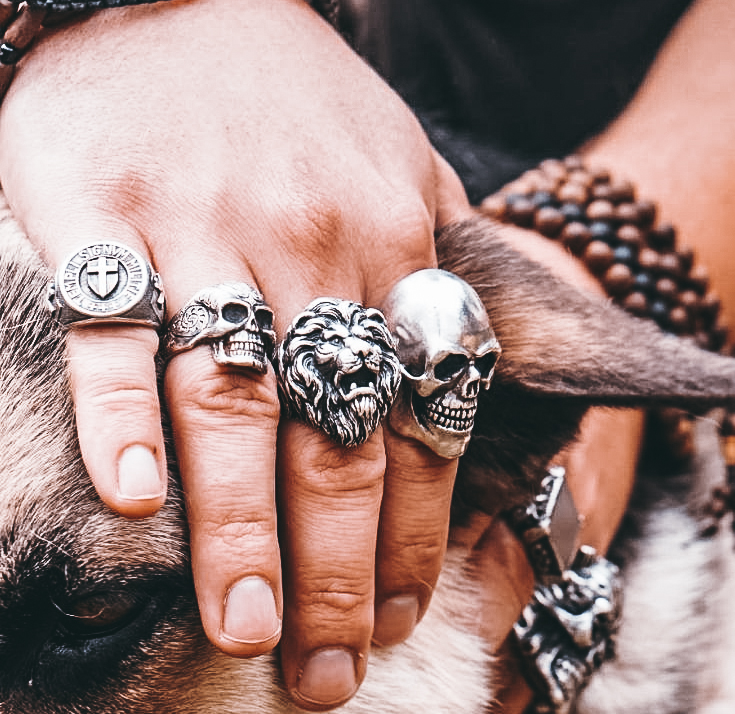 Everybody loves jewelry featuring cats. While a cute domestic cat is a symbol of elegance, sophistication, and grace, big wild cats combine royalty with aggressiveness, nobility with ambition, and strength with greatness. The most frequent guest in animal jewelry is, perhaps, the lion. Despite its appeal, is it really worth wearing a lion ring or pendant if you don’t know what it means? Read on if you’re wondering what secrets this undeniably majestic symbol holds.

The Duality of the King of the Jungle

The lion has a dual meaning. Since it encompasses both solar and lunar symbolism, it is the personification of good and evil.

As a solar symbol, the lion stands for heat, brilliance, fire, splendor, strength, courage, fortitude, justice, and law. On the other hand, the lion speaks of cruelty, ferocity, and animal lifestyle as it is evident from its lunar nature.

The lioness, which is the embodiment of the lunar principle, accompanies the Great Mother. While symbolizing maternal instinct, she is frequently depicted alongside goddesses of war. The goddesses of Crete, Mycenae, Phrygia, Thrace, Syria, Lycia, and Sparta bore an image of the lioness on their crests. A lioness appears next to the winged Artemis, Cybele, Fortune, and the Gorgons. In India and Tibet, she is an attribute of Tara as well as a symbol of earth and motherhood.

Lions cast in noble metals are symbols of power and sustainable prosperity. Such talismans bring good luck and happiness to people full of ferocity and nobility. Lion amulets straighten traits associated with this mighty beast – courage, virility, and stability.

Lion Jewelry Designs and Their Significance

You can trace the meaning of a particular piece of jewelry by looking closely at how the lion is depicted. By the way, if lion symbolism is to your liking, don’t hesitate to explore a huge collection of lion rings at https://www.bikerringshop.com/collections/lion-rings.

If the lion is depicted together with the unicorn, this duo symbolizes the rivalry of solar and lunar energies. The lion defeating the boar signifies the power of the Sun taking over the powers of Winter.

The lion and the lamb symbolize the new-found paradise, the original unity, as well as the end of this world and all its conflicts.

A pair of lions denotes a “twice stronger” ruler. These lions are the guardians of doors, treasures, and the Tree of Life. Oftentimes, this pair holds the solar symbol that personifies vigilance and courage.

A winged lion or griffin can represent androgyny or the union of two elements. An image of the lion holding a throne reveals the desire to gain power.

The meaning of the lion is similar to the Sun and the Crown. Therefore, you can often see combinations of these images in jewelry. Needless to say, a totem featuring these combinations is more potent than a symbol of the lion on its own.

When it comes to materials for your lion jewelry, your best choice is gold since it is associated with the sun. Should you pick silver jewelry, make sure it features inlays or detailing in yellow, red, and orange colors.

Who Will Benefit From Lion Jewelry?

Lion totem jewelry helps a man become a natural leader and rally other people around him. At the same time, it may bolster an egoistic attitude. Such people put themselves first and don’t consider the wants and the needs of others.

A lion talisman will fuel your creativity and enhance your ability to love. On the flip side, it will enhance your jealousy and pride.

The lion is the saint patron of people who early leave the father’s home to live as they please. This symbol helps them find their place in life and create their own “pride” made up of loyal friends and family.

A man wearing a lion totem enjoys playing big, aims for the most beneficial roles in society, and is the king of his own life. He is confident in his powers and sexual abilities. He longs for fame and honor as well as he requires recognition.

As a partner, he is rather loyal. That being said, he can be too selfish – he lets his woman love him and take care of his precious self. After all, wild lions let their females hunt while they bask in the sun. Their motto is “lions do not hunt mice” meaning they leave all the trivial things to others. They start doing something only if the matter is important and complex.

A woman flaunting a lioness totem is adept, talented, and energetic. She devotes a lot of time to family and friends. Communication with beloved people gives her a sense of security and content. Due to her generosity, she sacrifices her time and money for things she deems important.

A woman-lioness needs a strong partner but she isn’t always treated fairly. She’ll give her all to her family. In work matters, on the contrary, she tries to hold a privileged position that provides independence. She wants to choose on her own when and what to do.

“You spoke, Sir?” Top Tips on Buying a Bespoke Suit