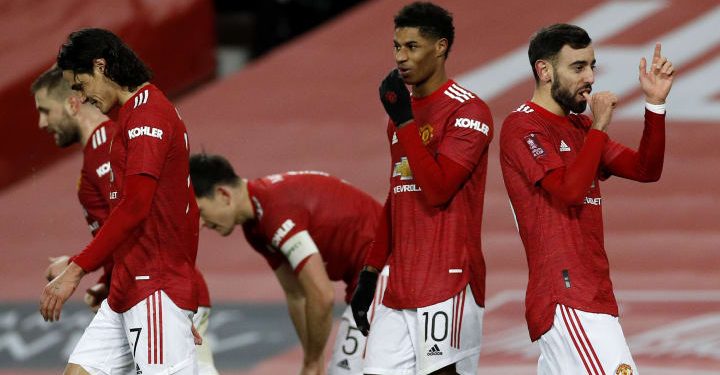 A top quality free-kick from Burno Fernandes in the 78th minute of the match has sent Manchester United to the FA Cup’s fifth round. A five-goal thriller which had every sort of drama ended in favour of Ole Gunnar Solksjaer’s team. His team is now set to face West Ham United in the fifth round of FA Cup in February.

After tasting a defeat at home, Liverpool was once again the second-best team against Manchester United. Moreover, Jurgen Klopp has failed the fifth time in this competition to go beyond the fourth round.

The game between two heavyweights started with a sublime goal from Mohammad Salah in the 18th minute. However, Machester side was quick to react, and Mason Greenwood scored the equaliser in the match’s 26th minute. Marcus Rashford then turned the game in the 48th minute to give a one-goal lead to his team.

However, Salah stood tall once again and scored another equaliser in the 58th minute of the match. It looked the game will move into the extra time, but Bruno Fernandes buried this match with a classic free-kick goal. The Portuguese midfielder scored his 28th goal for Manchester United and reserved a place in the fifth round for his side.

Solksjaer showed his happiness by saying that it’s fantastic for his side to win against the last year’s champion. He also praised his team’s mentality and added that it’s getting stronger and stronger. He ended the interview by praising his team’s confidence and said it’s good for them to win such tight games.

Jurgen Klopp was again frustrated by his team’s performance and mentioned that they wanted to win this game. However, he also admitted that to win this game, they should be at their absolute best. However, Liverpool’s manager cleared that he still trusts his players. He added that his team is still united as a group and they know that they have to work on from here.