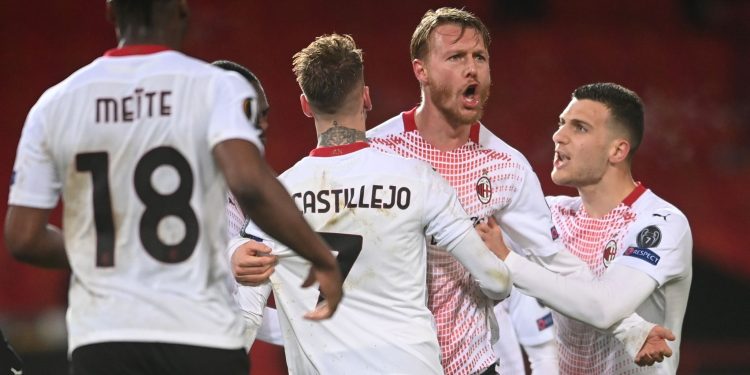 Simon Kjaer scored a late equaliser against Manchester United in the first leg of the Round of 16 for the Europa League. The second leg for the same game will now take place on March 18.

After a bright start in the first half, Milan almost took the lead when Franck Kessie’s fine volley ended in the net. However, VAR ruled out the incredible strike due to handball. On the other hand, United’s captain, Harry Maguire, missed a sitter from a yard out.

As a result, Milan grabbed a late equaliser in the 90+2nd minute when Kjaer headed the ball into the net. This goal means now Milan will host the Manchester side for the second with a lead of an away goal.

Manchester United’s manager quickly praised Amad Diallo’s impact on the game and added that he still has loads to learn. Later, Ole added that his team was relatively slow on the ball, and he’s pretty disappointed with that. Lastly, he mentioned that hopefully, players like Marcus Rashford would be fit enough for the second leg against Milan.

As for now, Manchester United players will get some rest, and then they’ll host West Ham on Sunday in English Premier League.

Megan Rain who is following her passion and building her empire