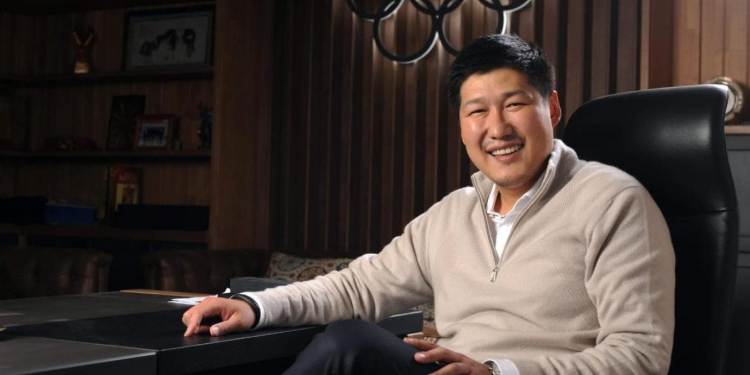 Battushig Batbold has been elected as a member of the International Olympic Committee on July 17th, 2020 this is an extraordinary event in Mongolia’s sports history from every angle. After almost five decades, a Mongolian national was elected as a full standing member of IOC once more.

IOC membership is once in a life time achievement that many cannot reach. Battushig has started his journey in the Olympic community in 2015. He was first elected as a President of Mongolia’s Badminton Federation followed by his nomination and election to be a council member of Badminton World Federation. This was the first time a Mongolian national being elected to an executive position of an international sports federation. After being actively involved in the Olympic community, in 2017 he was elected First Vice President of the Mongolian National Olympic Committee becoming the youngest person to hold this position in Mongolia. The following year, he was appointed as member of the Marketing Commission of IOC and re-elected again in 2020.

Battushig’s interest in sports has a long history. In school he was captain of his high school basketball team in Seattle at the Northwest School. When he studied at University of Chicago, School of Economics he dreamt of playing professional basketball and would become best friends with one of the Chicago Bulls players of the time, Luol Deng. Luol also an international figure originally from South Sudan has long term friendship with Battushig, where both have contributed to sports and basketball development through their foundations. Battushig’s father founded and sponsored one of the first professional basketball teams in Mongolia in the 1990’s, Altain Burgeduud (Altain Eagles), after their family company name of Altai Holding. Battushig has continued the support and development of this team even as it goes to different leagues in the country. Currently Battushig’s father Batbold occasionaly plays in the Master’s league, for seniors players.

After working as an analyst in Morgan Stanley and graduating Harvard Business School Battushig came back to Mongolia and headed his family business, Altai Holding. Currently, he serves as a Chairman of Altai Holding, one of leading business groups in Mongolia, Emart Mongolia, one of the most successful and innovative retail chains and Skytel Group, a pioneer in telecom and media industry. In the span of just four years, Emart has opened three hypermarkets introducing international standards of service, sourcing and quality. It became second largest retail chain in Mongolia in this brief period of time. The company has created over 1000 jobs directly and created growth opportunities for local small medium businesses in meat processing, milk and dairy, green produce and many other areas.

Altai Holding as a group employs over 1800 people and contributes over 20 billion Tugrug in taxes and fees to state and local budget. All of its holding companies are ranked each year in the TOP-100 companies of Mongolia identified by Chamber of Commerce where  industry leaders are positioned in terms of taxes paid, number of employees, social contribution and environmental practices.

Battushig’s father, Batbold Sukhbaatar, was the 26th Prime Minister of Mongolia in 2009 until 2012 and Chairman of the ruling Mongolian People’s Party. After Mongolia started a transition from the one-party authoritarian rule to market economy and democracy, he was one of the first Mongolians to start a private business and grow it to a large corporation before entering politics. As Prime Minister and Chair of the governing party he initiated introduction of Cambridge International Education Standards to public schools in Mongolia, reform of the stock exchange and its cooperation with London Stock Exchange, adoption of European technical and governance standards among many other things. The family values development of the country, contribution to sports and arts as well as the youth of the country. No doubt Battushig has continued this legacy well so far as he starts a bigger journey.

Beyond Global and Coin Zoom Launch the Wallet of the Future