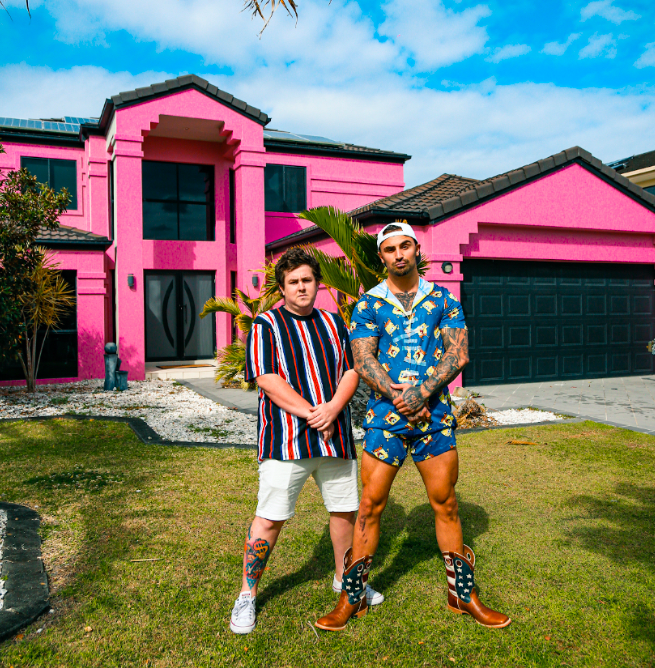 The Aussie celebrity has garned fans online for his collaborations with huge stars on YouTube. As a growing online sensation on Facebook, Instagram, YouTube and other platforms, Jackson O’Doherty is often spotted ranking up millions of views and followers for the pranks he so famously pulls on others, now he’s the one being laughed at after he recently returned home from a year overseas to find his house transformed into a pretty pink Barbie-esque boudoir.

Revenge was sweet and much enjoyed by prankster Lacclan Gottfried better known online as @itslacci, a friend of Jackson’s who had been conjuring up this hilarious stunt whilst he was away from home. The side-splitting video which can be found published on Jackson’s account on September 7th has already racked up a whopping 3 million views on Facebook alone.

The video kicks off by documenting the painstaking process of painting Jackson’s entire house in bright pink. “Slow and steady wins the race” sneers Lacclan as the camera pans in on him precisely painting the side of the house with a fine paint brush. Having hired a band of painters to help him get down to business, Lacclan makes great headway and gets to work, dazzling up the house and covering the mansion from top to bottom in bucket loads of the garishly coloured paint.

Along the way, he banters around with other stars in the scene, earning a timely “aww” from video watchers, as he paints his puppy dog’s nails pink to match the house.

And it wasn’t cheap either – especially for a prank. Upon spending thousands of dollars and multiple hours making the house look the ‘pink part’, Lacclan waits for Jackson to arrive back home, after his time in lockdown in America.

Pulling up into the drive, it wasn’t long before he caught his first glimpse of the pink house looming on the horizon. In the video, Jackson is seen with his hands over his face in embarrassment, and bangs his head against the seat in despair “Holy S*** What have you done? The neighbors are as going to be soo annoyed” says Jackson.”

With zero empathy, Lacclan continues to mock him with a grand “Welcome home!”

Referring to his neighbors in the gated community Jackson laughs “A lot of people get upset if the grass is too long, or if you leave a bin out here. Now they’ve got to deal with this.”

Jackson’s irritation is short-lived, and after strolling around the house in disbelief, he is quick to concede that it was “a pretty nice job”. Hopefully that means it was worth the thousands of dollars and endless hours of work.

The prank is all in good humour though; it’s just a laugh and some well-needed fun which we all need this year. We wonder if Jackson has managed to keep his neighbors at bay and is still rocking his Barbie pink coloured house.