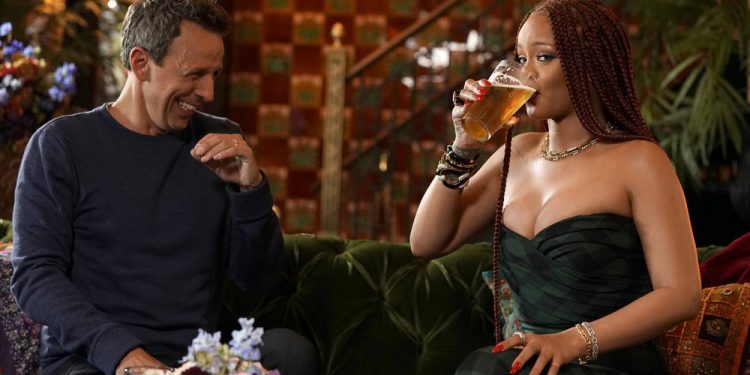 Seth Meyers, the host of Late Night with Seth Meyers accomplished life goals of many Rihanna fans. He went out day-drinking with Rihanna. Seth Meyers takes various members of his family out for a few drinks during the day, with inevitably messy results.

In his latest installment of the segment, he did the impossible. He roped in Rihanna to join him in getting drunk. These guys enjoyed a few bevies together and the result was fantastic. Rihanna and Seth Meyers started things off with a pint.

Rihanna ditched her drink halfway. Maybe, she realised that this was going to be a long marathon, rather than a who gets drunk first sprint. Then the show progressed to Rihanna drinking cocktails based on her hits. It included Under my umbrella, Diamonds in the Rye and We Found Veuve in a Hostess Place. Even though these have fancy names, they didn’t taste half as fancy as their names.

The most iconic moment of this drink marathon was Rihanna swigging straight from a bottle of champagne. Who thought that she could make downing a champagne bottle so classy! That was not it, the marathon continued with her downing a tequila out of a chocolate bunny, talk about getting creative.

Rihanna is now focusing on her lingerie business, and it has been three years since she released a music video. But she is working on an album and wants to take her time with it. She said – “I am working on a really fun album right now. I am really happy with a lot of the material we have so far, but I am not going to put it out until it is complete. It makes no sense to rush it, but I want it out. I have gotten to the point where I’m like, “Even if I don’t have the time to shoot videos, I’m going to put an album out.”