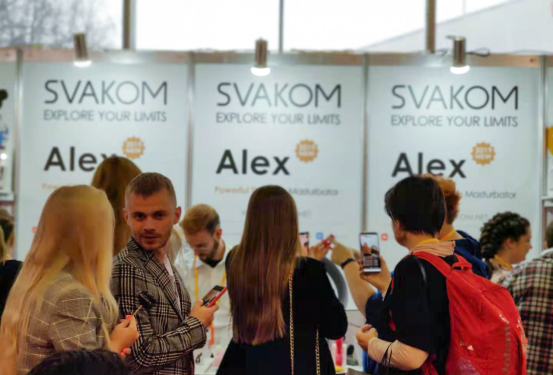 SVAKOM has unveiled new innovatively designed male pleasure product during the Russian Fair, ERO EXPO. The fair took place from 1 November to 3 November and saw the presence of many manufacturers, distributors, and other people from Russia. SVAKOM showed its new product Alex, a powerful thrusting masturbator that is specially designed for male pleasure.

According to SVAKOM representative, Alex has a realistic touch and immersive experience which helps to give the ultimate pleasure to users. It is the first-ever masturbator from SVAKOM and it is internally equipped with ultra-soft TPE material as well as 7 selective intense auto-thrusting modes. SVAKOM’s other products such as Siren and Nymph were also the center of attraction at the fair and due to this, they get a positive response from the people. SVAKOM used all the effective marketing strategies to spread the word about its products among the visitors.

SVAKOM attended the Russian fair with the distributor Asktol and it also met with all the manufacturers, distributors, and small wholesale companies present during the three-day fair. A high number of people came to attend the fair in order to see the new product launch from SVAKOM. According to the company representative, SVAKOM interacted with giants from the sexual pleasure industry and learned a lot of new things from them. The company got feedback from all the people from Russia who attended the three day fair in Moscow.