Talk the Talk: Public speaking hacks you don’t know about 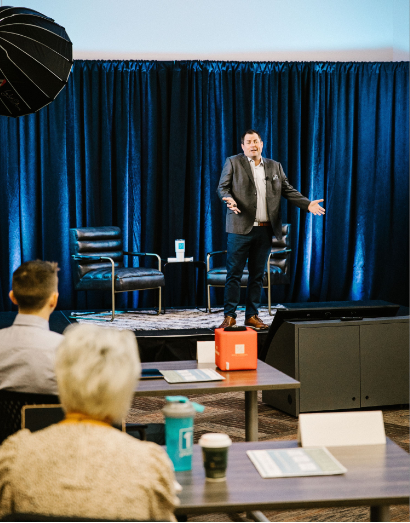 Public speaking is almost universally dreaded. When the fear is so great it approaches a phobia, it’s called glossophobia, and it scares more people than giant hairy spiders. Some estimate that glossophobia affects up to 75% of us, so if you get a little sweaty at the thought of expressing yourself in front of a crowd, you’re in the solid majority.

So the first thing you should do is stop shaming yourself for it. For starters it’s not helpful, and it’s also not realistic. Yet shame persists, because while it’s easy to find logical reasons why snakes or spiders should arouse fear, public speaking is less obvious. Are you still shaming yourself? Stop it. There’s a perfectly logical reason to fear public speaking, and it’s been hardwired into your brain to keep you alive. If you were alive thousands of years ago, you may very well survive a spider or snake encounter, but your chances of survival are almost none if you’re banished from your group.

Speaking in public means you will stand out, and therefore, you are more vulnerable to others judging you and assessing your worth. What if they don’t like what you have to say? What if you look weak, or say something stupid? While you’d really have to botch a speech to suffer estrangement over it, there are still consequences for a poor performance that surpass your typical spider bite.

Most articles on this topic don’t mention this hack, but perhaps the easiest way to give yourself a tremendous boost when it comes to public speaking is to take medication beforehand. Many professional musicians swear by a blood pressure medication that prevents their hands from shaking, and is a godsend when they need to perform at their best. And yes, a low-grade anti-anxiety medication taken as needed really takes the edge off, and veteran stage performers have been known to pop one an hour before a big opening night.

If you are brave enough to broach the subject with your doctor, there’s a good chance he or she will laugh and say they’ve been prescribing these meds for CEOs, artists, and those about to interview for a job for years, and it’s high time you asked. If you go this route, it might help you get over an important hurdle, and once you get a few speeches under your belt, you might not need to take them anymore. But don’t kid yourself…some of your favorite stage actors never get over their stage fright, and just fight through it, learning to better hide their nerves with time and experience.

There are other, non-pharmaceutical approaches to calm yourself, or at least give yourself the appearance of being calm…almost as good as the real thing. “I use breath scaling,” states Kris Lindahl, CEO of Kris Lindahl Real Estate. “Bringing increased oxygen to the brain improves focus and energy. Whether you are speaking in front of thousands of people or smaller groups, breathing exercises are always important.”

Other public speakers swear by trying to get a sense of the room they’ll be speaking in, so it feels familiar. Some even practice speaking in the outfit they’ll be wearing that day. If a little humor is in your wheelhouse, sometimes starting with a joke that will get the audience laughing takes the edge off.

Another trick that’s commonly used with those who suffer from stage fright is to use the “superhero” pose before speaking. Stand with your feet shoulder width apart, put your fists on your hips like Wonder Woman or Superman, and lift your chin. Stand like that for a couple minutes, and you’ll see why people do it. Studies have, in fact, shown that this pose raises confidence and lowers stress.

Finally, you might try to rename the feeling. Your heart is pumping, you’re feeling jittery, and you might feel a bit damp in the palms. Instead of describing yourself as nervous, you might try labeling it as excited, which has a much more pleasant connotation for almost the exact same set of feelings. It’s also true: whenever you’re speaking in public, you’re about to do something special, and that’s downright exciting! Reframing your experience in a positive way allows you to honor what’s happening in your body, yet feel more in control of it. Once you feel more in control of the feelings, you’d be amazed how those butterflies start to settle.

Getting To Know Dembow Sensation Yorkifer