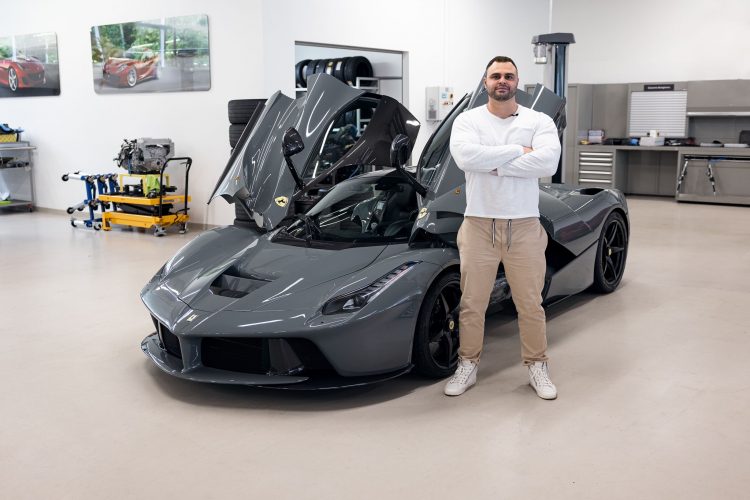 Lecha Khouri is an internationally recognized car show host and car enthusiast. His name is one of the most revered ones in car communities across the world. Popularly known as Lee by his fans, Lecha Khouri is someone who has brilliantly churned out a concoction of passion and professionalism in his career.

Lecha has a huge car collection that consists of over 54 high end special cars. He has numerous rare classics and modern cars, supercars and Hypercars like the marque Ferrari, a couple of Porsche 911’s, Lamborghini, Bentley, a single Maserati and the Ferrari F40, the LaFerrari, McLaren P1, Porsche 918 Spyder and the McLaren Senna XP. Very recently, Lecha Khouri has added a special 1 of 1 Ferrari LaFerrari to his car collection. This new Hypercar LaFerrari is an exclusive model and has never been registered or driven before. It is one of the 500 models produced and is also one of the only 50 models that come with an exposed carbon fibre roof. The car is brand new, still has delivery mileage and comes with all accessories. On top of that, it is the highest paid for LaFerrari in the whole world.

Apart from being a dedicated car collector, Lecha Khouri is a car show host. He is the founder and host of the popular show Supercar Advocates. In the show, Lecha and his crew drive and experience some of the most exotic cars in equally fabulous locations around the world. Earlier, the team shot several episodes of Supercar Advocates in the city of Los Angeles, United States. As soon as COVID-19 travel restrictions will be eased, Lecha Khouri and his crew will return to LA to shoot more episodes on a filming contract. The show Supercar Advocates is famous for a lot of reasons but the primary one is Lecha Khouri’s unparalleled screen presence and passion for cars that the viewers absolutely love.

Talking about his career in an informal discussion, Lecha Khouri said, “I’m one of the very few people who are fortunate enough to follow their passion and make the most out of it. At the age of twenty one, when I got a pre-owned Ferrari all by myself, a sense of achievement was instilled in me. Since then, I’ve taken great efforts to stay true to my passion, continue expanding my car collection and make acquisitions that are not just expensive but also quality and rare in nature.”

Lecha Khouri has hundreds and thoudands of fans and followers across social media platforms like Facebook, Instagram and YouTube. He has become an icon in the car lover realms of the world. Lecha Khouri has recently built a new showroom with the objective of housing and displaying part of his car collection. This showroom might be open for public access on special occasions.

Additionally, Lecha Khouri is the CEO of a privately owned company called the Fenlan Group. It deals in the fields of investments, real estate and property development. Lecha Khouri is responsible for the growth and expansion of the company and is regularly seen travelling and attending meetings and conferences for the same.