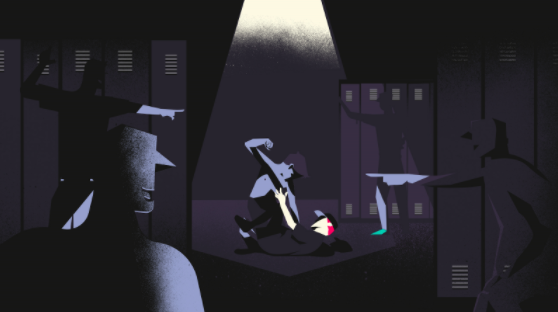 Over 50 young people, social workers, teachers and police officers were interviewed, and their stories turned into fourtwo minute films.

The animations take a non-judgmental and unflinching look at the rapidly escalating situation.  The often bleak and frustrating world we discover is reflected in the striking art direction and sound design, calculated to engage rather than glorify those involved.

Episode one follows a young person who has suffered a family bereavement and things spiral out of control.  The film explores the themes of social media as fuel for antagonizing behaviour, and money as the main motivator in getting involved in the gangs.  The animation is slick but powerful, particularly the fight scene at the school.

It’s a male world, but episode two tells us the story of a young woman deeply involved in drug dealing for the county lines.  ‘Making serious money’ we hear again is the main motivator.  The animation studio has created a very atmospheric film here, with its rain-soaked streets and gun toting villain.

‘Selling drugs was easier than sitting my GCSEs’ is the reality we hear in ep3, the tale of a young man who turns from being exploited to exploiter.  This is a classic pattern where a young person will move up through the ranks in a criminal gang and end up doing to others what was once done to them.

The striking series of animations ends with a film titled ‘Hope’ – and offers up some degree of optimism for those looking to escape the vicious cycle of life in criminal gangs.  Between the social workers, the teachers, police and social services some great work is being done, although sometimes not noted:  ‘You saved me, and you don’t even realise.’