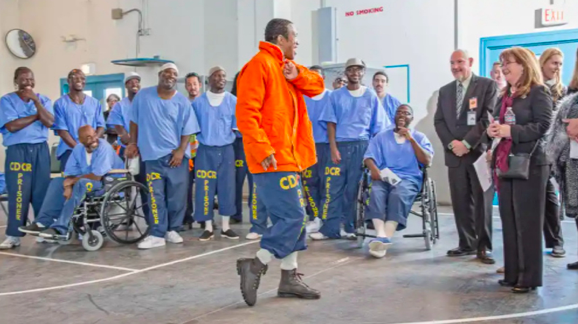 Five-years-ago at the only prison in Los Angeles, Donald “C-Note” Hooker became a very prolific artist after being exposed to Arts-in-Corrections.

In 1976, California Governor Jerry Brown signed into law the California Arts Council. After being exposed to Prison Art, its first director, and artist herself, Eloise Smith, along with her husband, historian Charles Page Smith, created the Prison Arts Project. Funding for the project derived from a nonprofit created by the Smiths, the William James Association. Funded by private donations, its first project was a success. This spurred the state’s interest to fund and create the Arts-in-Corrections. Arts-in-Corrections was funded at all 33 of California’s prisons, until California’s budget crisis at the start of the millennium. By the start of the last decade, 2010, the program had been defunded. Members of the art community and foundations clamored legislators and the governor to bring the program back. Fiscal budget 2013-2014 saw funding for a pilot program. Fiscal budget 2015 saw the introduction of the theatrical troupe, The Strindberg Laboratory, on the grounds of California State Prison Los Angeles County, on their Facility B Yard. This yard was the prison home to members of the area’s street gangs. Los Angeles is America’s gang capital, and is possibly, the gang capital of the world. It also included prison gang members who were recently released from long-term solitary confinement due to a court order. It was in this environment that The Strindberg Laboratory entered the prison.

One of the prisoners who volunteered to participate in the theater class was Donald Hooker, AKA C-Note. C-Note is an original gangster (OG) Crip from Los Angeles. He had spent over a decade in a maximum-security prison deep in the Sierra Nevada mountain range. The Associated Press called it an isolated racist prison. He told Darealprisonart, it was a frustrating place getting his voice, art, over the prison wall. The prisoners who volunteered were from warring gangs and ethnic groups. He was a principal in holding this group to function together. His work Birth of a Salesman, a play on Arthur Miller’s Death of a Salesman, received an unsolicited vote by the group to be the opening act to the play they created, Redemption in Our State of Blues. The play was very successful and raised hundreds of thousands of dollars in public and private funds. It led to “BREAK IT TO MAKE IT (BITMI): Busting Barriers for the Incarcerated Project, Los Angeles, California.” A first, for prison reentry projects in the United States. It provides two years of free housing from the Los Angeles Mission. Two years of free education from the Los Angeles City College, and participation in the jails to jobs program of actual paid theatrical work with The Strindberg Laboratory.

In 2016, he wrote the play Life Without the Possibility of Parole (a prison play). It was inspired by a 2016 exposé in the California Prison Focus on the 175-women serving a sentence of Life Without the Possibility of Parole (LWOP), at the Central California Women’s Facility (CCWF). Life Without the Possibility of Parole (a prison play) is a fictional tale about one of the women mentioned in the exposé, a 23-year-old named Kay. In 2017, he co-edited and co-wrote the play Fathers and Sons (A Play Written By Prisoners). Spurred on by C-Note’s urging, Fathers and Sons (A Play Written By Prisoners) is a compilation of prison writers who crossed racial and gang lines to put together a theatrical work. The theme is about intergenerational trauma. In 2018 he wrote The Ghost of Charles Dickens’s Christmas Carol. It is a play about an assisted living home (past), a boys home (future), and a transitional home (present). Every Christmas the boys home and the transitional home go into the woods to cut down fresh Christmas trees for area assisted living homes. Besides cutting down and donating trees, they also help with the decorating of the trees with the residents at the assisted living homes. It is a story based on getting in one’s own way, reflection, and ultimately, coming together. In 2019 he wrote the short story God Is A Woman. It was specifically created to be published in Columbia University’s, Journal of Literary and Art, Issue 57. God Is A Woman is a  psycho-drama, love story, that begs to answer the question, “What happens to the memories of prisoners who have been locked away for decades?” Its name is from an Ariana Grande song of the same title, and is based on one of his earlier works that predates the lyrics to God Is A Woman, but is of a similar theme. Never published, because C-Note feared his writing would be perceived as blasphemy.

In 2019, he co-wrote I Stand2 Vote with Minster King X, AKA Pyeface, or the George Jackson of Rapp. It is a one-act-play of two opposing long time activists and politicians arguing the merits of restoring voting rights to the incarcerated and formerly incarcerated. It is set in the California capital, Sacramento, in the state’s legislative branch Assembly floor. In December of 2019, King and others performed the play at the first annual Ratcliff Awards. In 2020, King would go on to record a Hip Hop track called I Stand2 Vote.

In 2016, C-Note was asked to create poetry, around some of his artwork being exhibited at the Escaping Time, Prisoner Art Exhibit, on Governors Island, New York City, July 26, 2016 to October 2, 2016. This inspired him to create a digital art form known as Paintoems. Paintoems are poems inspired by paintings or drawings, or paintings or drawings inspired by poems, combined together, as a single work of digital art. All paintoems are created under the Creative Commons copyright law, giving the public access to free use, as long as the artist or artists are acknowledged. In 2017 he created a work entitled, Tho Her Name Is Not Gibraltar She’s Still Called The Rock. It was created for the Prisoner Art exhibit, Art Escape On Alcatraz. This exhibit was held on the Island of Alcatraz in the San Francisco Bay, in the United States, in the State of California. Part of the exhibit included two off sites in California’s Bay Area. This work was exhibited at one of the off site exhibits, at the architect Frank Lloyd Wright’s, Marin County Civic Center Complex at the Marin County Free Library’s, Anne T. Kent California Room. In 2018 he was asked to give the Defy Ventures’s graduating commencement address. There, he recited his work Angelic Tempest in front of venture capitalists, CEOs, educators, prisoner families, and other noteworthy leaders. In 2018, his paintoem Incarceration Nation was recited at the 28th Celebration of African American Poets and Their Poetry. The painting was created in 2017 for the August, “Millions for Prisoners Human Rights March.” A national march in Washington D.C., in cities throughout the U.S., and other cities across the globe. The poem written later in the year was inspired by the NFL players “Knee Protest.” His next opportunity to participate in this Black Poets event was its 29th Celebration. Its theme was “Black Migration,” emphasizing the movement of people of African descent to new destinations and subsequently to new social realities. From this theme, he created American Negro: A Migrant’s Story. The poem begins with listening to the drum beats in West African homelands, to the silence of those drums inside the prison cells of America. Due to a mix-up, it was not recited at the event. In 2020, C-Note created Journey to Afrofuturism. It was recited at the 30th Anniversary Celebration of African American Poets and Their Poetry. The event had two themes, one was the “400 Years of California’s African American History.” C-Note had discovered that Spanish conquistador, and Governor of Mexico, Hernán Cortés, named California after a Black woman from a 16th Century romance novel The exploits of the very powerful cavalier Esplandian, son of the excellent king Amadis of Gaul, written by Spanish author Garcia Ordonez de Montalvol. In 2020, Speculative City agreed to the poem’s print rights for their December 2020 magazine’s theme, Afrofuturism. 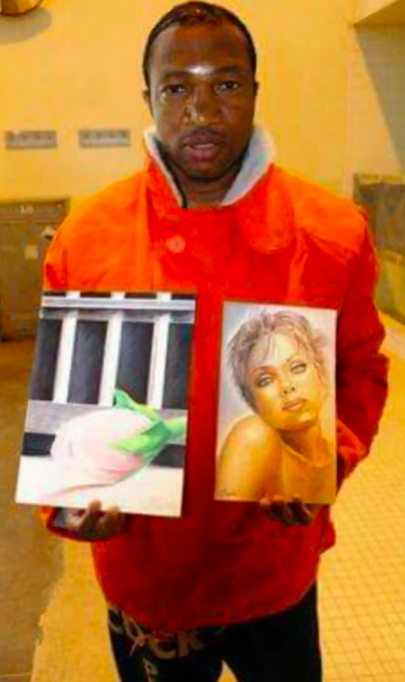 In the spring of 2016, C-Note was given the opportunity to participate in the United States first Prison Art exhibit to consist of artists from two men prisons, and one women prison. These prisons were the California Institution for Men (CIM),  the California State Prison, Los Angeles County (CSP-LAC), and the California Institution for Women (CIW). The exhibit was curated by the California State University at San Bernardino (CSUSB). The exhibit Through the Wall: Prison Arts Collective was held at the CB1-Guest gallery in downtown Los Angeles, May 14th to 29th. C-Note submitted his Work Mprisond (2014). It was a mixed-medium of wax, graphite, and pastel, on 9 in. by 12 in. paper. The exhibit was published into a book.

Since 2016, his Works have been in nearly 15 collective exhibitions of Prison Art. Some notables were the Art Escape at Alcatraz on the Island of Alcatraz, May 1, 2017, to June 30, 2017; Between Here and There: International Fine Art Contest 2017. The 4th art competition of Art and Prison eV had received 371 entries from prisoners from 23 countries. It first exhibited at the Liechtenstein National Museum in Vaduz, Liechtenstein, Germany, in 2018, and had since travelled to various cities throughout Europe; Everything Coffee consisted of two exhibits, one in January of 2018 at Gimme Coffee’s Cayuga Street coffeehouse in Ithaca, New York; the other in March of 2018 at Gimme Coffee in Trumansburg, New York. The exhibit, like most Prison Art exhibitions, consisted of paintings and poetry. Visual artists were tasked with using coffee as their visual medium, as the curators were not looking for commercial works of steaming cups of coffee; Capitalizing on Justice was a Prisoner Art exhibition in October of 2018, at the Urban Justice Center, in Manhattan, New York City. The exhibition was curated by the Corrections Accountability Project (CAP), a criminal justice advocacy organization. The aim of the exhibition was to raise awareness on the issue of monetary exploitation of prisoners and their families. Participating incarcerated artists received financial awards decided by CAP’s curatorial committee; 2019, at the University of California at Los Angeles (UCLA), inauguration of Connecting Art and Law for Liberation (CALL). A three-day festival of talks, performances, interactive art workshops, film screenings, and an exhibition featuring Prison Art. Notable participants included activist like, actor Danny Glover, singer-songwriters Aloe Blacc and Maya Jupiter, Hip-Hop luminary Chuck D, poet Luis Rodriquez and others.

2020 would have seen his Work exhibited at the 2020 CCAD Fashion Show through the fashion line Mercy. Mercy is Columbus College of Art and Design (CCAD) first fashion line in its 141-year-old history to be designed with Prison Art. The fashion show cancelled due to Covid-19 concerns, would have represented the first time in the global history of the Catwalk, models would have walked the runway wearing designs featuring Prison Art. [To learn more https://www.c-note.org].