by Daniel Atkinson
in World 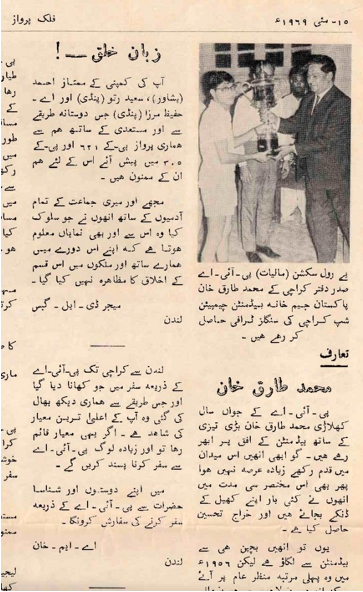 The countries of the world have been in conflict for many years. Since the beginning of time, humans have involved themselves in wars, battles, political unsettlement, and fights. From land to resources, there is nothing in the world that humans have not argued about. The absence of peace was the basis for most of the problems.

In the early times, people were not as civilized and wise as they are today. Even the slightest discord would lead to catastrophic battles. They lacked a sense of peace and harmony. World War I and II’s disastrous effects are proof that conflict and dissonance between two parties lead to no good. But with time, a change in attitude was observed. People like Mother Teresa, Nelson Mandela, and Henry Dunant are prime examples of peace observing and preaching people. Because of them and many others, the world has become a safe and better place to live. Inspired by them is a Pakistani badminton champion, Muhammad Tariq Khan, who contributed greatly to build the world-renowned Pak-China relationship.

Muhammad Tariq Khan is a celebrated Pakistani sports personality. He has many national awards and recognitions under his belt and is known for his clean shots in the court. Tariq won the prestigious Pakistan Gym Khana’s title as the Winner in 1969. Other esteemed platforms like Farhat Nishan Club Rohri, Islamia College of Sukkur, the Hyderabad Division Badminton Association, and many more have also recognized him. Khan was the first person in history to ever get two extra increments by the PIAC Management in 1976 for his extraordinary performance at the in-house badminton matches of PIA.

This national badminton champion had been interested in this sport since his childhood. It was due to his determination and love for badminton that helped him learn and excel without a coach. Tariq was an energetic soul who was passionate about playing badminton. As he had witnessed the partition very closely, he knew the struggles and hardships his leaders had faced to get an independent homeland. Tariq was a devoted patriot and wanted to play international badminton tournaments to represent his motherland in front of the world. With his exceptional badminton playing skills, Tariq wanted to create a fresh image of Pakistan and wanted to show that his country is no less than others.

The Unsung Hero of Pak-China Friendship

The friendly Pak-China relationship is evident to the world. The equal efforts that both countries put in to sustain a healthy and supportive relationship are exemplary. The basis of this relation was laid in 1962-1963 when the very first delegation of china of commerce, trade, and sports that is badminton, visited Pakistan. While many contributed to stabilizing this relationship, Muhammad Tariq Khan’s name remains prominent.

China had sent their best badminton team to Pakistan to play a friendly series of five matches. As Muhammad Tariq Khan had earned enough fame playing locally, he was selected to present the Pakistani team. Tariq had the chance to play several matches with the team. As the Chinese team were not fluent Urdu speakers and many of the Pakistani players did not speak English fluently, there was a language barrier. But Muhammad Tariq Khan bridged the gap between them and acted as a mediator with his English proficiency. He assisted the team and helped them with their needs. Tariq set a great example of hospitality and left no room for complaints about his Chinese brothers. Even when playing matches, the players exchanged many techniques and skills. It was a great learning experience for the teams as both were very fresh. Praising the Chinese badminton team, Khan says;

“One reason for the continuing superiority of Chinese badminton is the consistency in training their potential winners and champions. The promising talents are identified and inducted into the system very early, thereby providing them world-class training right from their budding years, maximizing their success later.”

Due to the selfless efforts of individuals like Tariq, the Pak-China relationship is much stronger and powerful now. Muhammad Tariq Khan escorted the Chinese team everywhere. He ensured to cater to all their requirements. He also organized a Pakistan tour for the team and made them witness the natural wonders of his beloved country. After playing a match with Tariq, one of the Chinese badminton players, said “Muhammad Tariq is one of a kind. He is immensely talented and knows how to lead a team.“

Muhammad Tariq Khan’s story as a peace initiator serves as an inspiration for many. Even today, he is passionate about representing his country on the international platform. He is a firm believer of peace and encourages the emerging talents to do the same.

Find out how U.K. Based Fashion Brand FARO London Are Taking A Fresh Approach To The Fashion Industry!

Find out how U.K. Based Fashion Brand FARO London Are Taking A Fresh Approach To The Fashion Industry!