Innovative NFT Collaboration Between Creatives, The Lions and LUKSO Raises Record Figure for the LGBTQI+ Community 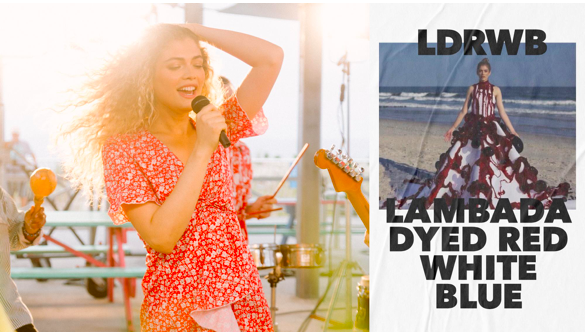 Every so often, a genre-bending project emerges that makes us question the traditional boundaries we have defined society around as a whole. This came to pass this very past week, when the world witnessed a groundbreaking collaboration between Brazilian supermodel and trans activist Valentina Sampaio, NYC co-creative agency The Lions Management, blockchain company LUKSO and a number of international creatives, successfully blurring the lines between fashion, technology and art together and landing a still-rising bid of $351,000 for the American LGTBTQI+ community in the process.

Tapping into the newfound popularity of non-fungible tokens, the Berlin-based tech company and U.S. agency teamed up to create a unique NFT of their own, with all proceeds donated directly to The Ali Forney Center, GLAAD, and Pride Live upon its sale. Accompanied by a short film lensed and written by Branislav Jankic and Jesse Ball featuring Sampaio and an all trans cast, Sampaio tapped into her own lived experiences as a trans woman to bring light to her community’s life-threatening plights while draped in a gown rendered in CGI by Russian digital artist NERI, with a one-of-a-kind NFT of the dress aptly timed for release during Sampaio’s own debut on the MET Gala carpet Sept. 13.

The short film, titled Lambada Dyed Red White and Blue, takes a modern twist on the 80’s classic song and music video Lambada by French group Kaoma, inspired by a Brazilian dance craze of the same name. The Portuguese word ‘lambada’ roughly translates ‘strong slap’ in English, an apt name for the NFT project that hits viewers hard with its impactful message.

“Never before has there been a greater opportunity to bridge the gap between our physical reality and the metaverse with the merging of creative industries: fashion, art and technology for the greater good, said Christiana Tran, co-owner of the Lions. “All of these industries can cause harm without intentionality, and therefore along with Valentina and the LGBTQ+ community, we unite them to save lives and evolve humanity towards a new reality where all people can thrive, powered by love. Together we are limitless. “

Beyond the NFT’s financial success, the unique NERI-designed dress found itself and Sampaio alike on the digital cover of fashion industry favorite publication V Magazine, encouraging readers to support the project and join Sampaio in “transforming the future,” eliciting a huge response on social media and a large number of reposts by top influencers.

“We hope our film and NERI’s striking NFT raise visibility for the trans community and create an urgent call to action for the world to proudly and strongly stand with trans people,” said Sampaio.

The inspiring international collaboration between fashion and technology, artists and blockchain, a supermodel and philanthropic organizations, resulted in an unprecedented NFT-driven donation to the LGBTQI+ community, breaking away from the traditional confines of charity projects and ultimately redefining what it means to give back.