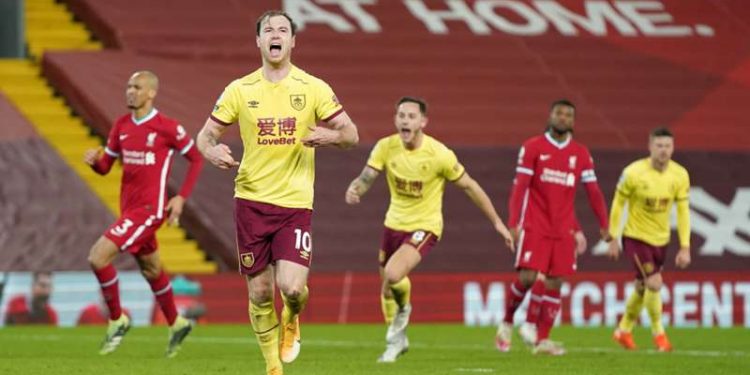 Liverpool’s unbeaten league run at Anfield is finally ended after a defeat from Sean Dyche’s Burnley. The last season’s champions were undefeated at Anfield from 68 games in the last 4 years. However, Ashley Barnes’ 83rd-minute penalty broke Liverpool’s record. Moreover, this defeat might also prove to finish their title hopes this season. Jurgen Klopp’s team is trailing by 6 points to the current league leaders Manchester United.

This was Burnley’s first victory over Liverpool since 1974 and picked three crucial points while staying in the relegation battle.

As for Liverpool, things are not looking good at the moment. They’ve not scored one league goal in 2021. Their last league goal came against West Bromwich through Sadio Mane, but the match ended in a draw.

Jurgen Klopp’s Liverpool started the first half with real confidence and came close to scoring multiple times. They managed to hit the bar and created their chances throughout the game. But, Burnely’s goalkeeper Nick Pope cleared most of the Liverpool’s chances.

Sean Dyche’s players stood tall and fought really hard against the defending champions. As a result, in the 82nd minute, Liverpool’s goalkeeper tried to rush and steal the ball from Barnes’ feet. But, Alisson misjudged it horribly, and Burnely was awarded a penalty. Ashley Barnes didn’t fluff from the penalty spot and delivered a crucial goal for his side.

Managers’ thoughts on their team’s performance

Liverpool manager Jurgen Klopp started the interview by saying that this game is a tough one to explain. He also added that they are not even thinking about defending the title at this point. However, he also mentioned his team’s hard work and added that we tried a lot, but sometimes you’ve to try harder to break the wall.

After a heated moment with Liverpool’s manager, Sean Dyche started his interview by praising team’s hard work. He added that there’s a positive belief among his players and he’s pleased with everything. He concluded on a positive note and added that they have to keep improving.