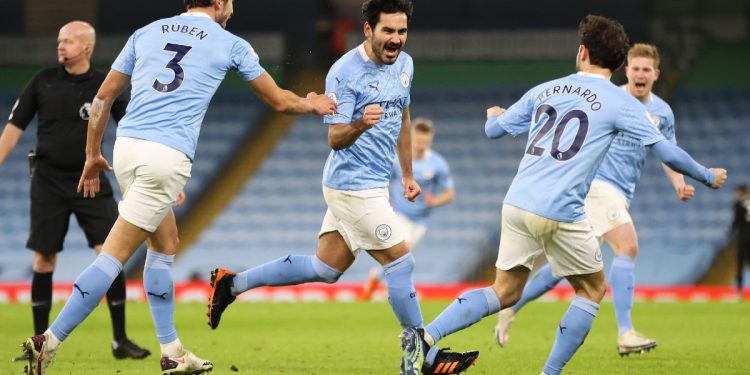 After Bernardo Silva and Ilkay Gundogan’s goals, Pep Guardiola’s Manchester City has now climbed to the second position. Now, their Manchester-based arch-rivals Manchester United is sitting at the top of the English Premier League table. However, City will surely have more confidence as they’ve played one less match than their neighbours.

Bernardo Silva broke the deadlock in the 80th minute of the game with a stunning goal. Later, in the 90th minute, Aston Villa conceded a penalty, and Ilkay Gundogan delivered the second goal for Manchester City.

The final scoreline was a bit harsh compared to Aston Villa’s overall performance. They came very close to scoring a goal multiple times during the second half, but Pep Guardiola’s team escaped all of them. Dean Smith’s team was back to full-strength, and Ross Barkley tested City’s goalkeeper Ederson couple of times. As for Manchester City, the result was a perfect gift for their manager’s 50th birthday. But, Pep would have surely loved more action from his side in the first half.

Aston Villa’s goalkeeper Emi Martinez also gave a decent individual performance by saving multiple efforts of Man City. However, City’s intense press and high tempo throughout the match was enough to find a way through.

The winning team’s manager Pep Guardiola started the interview by praising his team’s overall performance. He added that currently, his players are playing like champions. He also said that they had lost only two games this season so far and it’s important for them to play like champions. City’s manager ended the interview by adding that his team still needs to improve their finishing ability in the final third.

After seeing a red card from match officials, Dean Smith wasn’t happy with the match officials. His unhappiness was clearly visible throughout the interview. He also added that Jonathan Moss unfairly treated him. Dean Smith was also furious about the Rodri’s offside position and the handball decision against Matty Cash.