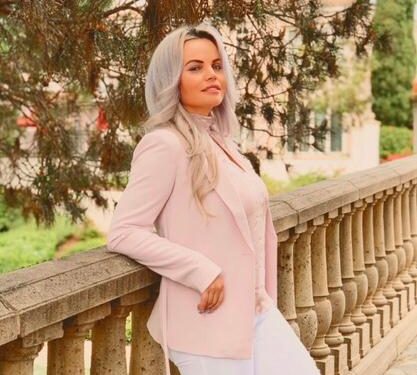 San Diego, CA: After standing in line at a Romanian bakery for hours, in the freezing cold, Izabela Hamilton was told by her father that there was a ‘magical‘ place where food is abundant, warmth is available to all, and anyone can become ‘someone’ if they want it badly enough, Izabela Hamilton was determined to make that place her reality.

“Before turning 21, I made the decision that I would leave my Romanian home to live in

America – and nothing could stop me,” said Hamilton, “I felt like my life would completely change in America, and it did. Was it easy? Far from it!”

Success did not happen overnight for Hamilton. Instead, she worked through a string of odd jobs – sometimes putting in more than 60 hours per week for minimal wages – all the while sending money to her family. Of this experience, she says, “I didn’t care how much I had to work as long as they were happy. I didn’t want them to ever hurt for money again. There were many nights I cried myself to sleep due to exhaustion and loneliness, but I knew I couldn’t give up at the first sign of hardship. I was set up to succeed and that’s all I saw.”

And so, with a laptop and a dream, Hamilton founded Rankbell – a boutique Amazon concierge specializing in helping sellers grow their businesses. Her goal was to help one million sellers reach the same goal she had for herself— financial freedom. Like many entrepreneurs,

Hamilton worked sometimes for only $50 per job in the beginning, but she knew she was working toward building something bigger.

Rankbell has seen success in the first five years of business and was recently voted as the leading experts in their industry. Now the company includes a team of passionate individuals – all united in the goal of helping others on their journey to success. Rankbell has served thousands of sellers – some of whom started with profits as low as $100 per month – grow their businesses into 7, 8, and sometimes even 9 figures, and is on track to achieve Hamilton’s original dream of helping one million Amazon sellers grow their businesses – and achieve financial freedom – by the year 2030.

The ranking service helps Amazon sellers increase rankings, boost sales, and maximize profits. Their services include assisting with product launches, PPC management, listing optimization, social media, and more. For more information on Rankbell services and how they intend to reach their ‘one million served’ goal, reach out to bell@rankbell.com

About Rankbell: Rankbell is an Amazon concierge focused on helping small businesses reach financial freedom – no matter how big the goal! Our services include listing optimization, images, and video, PPC management, social media, content marketing, and press releases, and ranking services. Founded in 2015, we are on a mission to help 1 million customers achieve success by the year 2030. Will you be one of them? www.rankbell.com