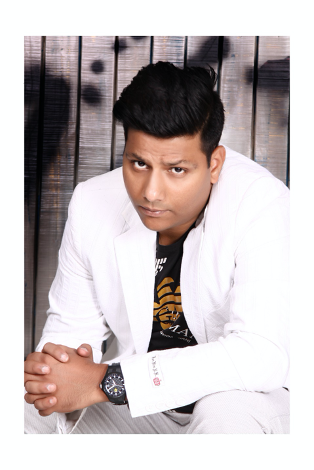 Mukesh Asopa has been a successful actor, producer, and director, which has brought him to the summit of the independent film world.  He is a member of the Directors Guild of Canada and an alumnus of the distinguished Barry John Acting Studio.  Earlier in his career, Asopa appeared in movies such as No Place to Hide, Karim, Bollydouble, and Reel Zombies as well as television shows including Pastor Greg and Ghostly Encounters.  He then established his own film production company, Asopa Films Inc., which launched Asopa into the next level of the independent film industry.  His incredible motivation, high energy, business knowledge, and passion for film gave Asopa the edge he desired for organizing the needed finances, developing scripts, and finding the right collaborators for his films.  Asopa greatly respects the creative process and takes on many responsibilities both in front of and behind the camera.  In addition to his many roles in the production of his films, Asopa is well-known for the nature of his blended elements of different genres.  He particularly enjoys incorporating varying aspects of drama, thriller, horror, and romance creating truly unique storylines.  Asopa is greatly driven to portray the untold stories and present them in a distinct way that gives depth to their narratives.

Asopa has produced many highly praised and awarded films including Aisha and Rahul as well as The Taste of Relation in 2009, Zombie Beach in 2010, Chambers Gate in 2014, and Depth of Pyaar in 2019.  He has won 72 awards so far and is excited to release his newest film, Bloody Romeo, to film festivals this year with hopes of landing the premier in The Toronto International Film Festival as the film was also shot in Toronto.  Bloody Romeo has been submitted to the prestigious Cannes Film Festival-2021 for its possible World Premiere.  Bloody Romeo has also been submitted to over 20 Oscar Submissions Qualifying film festivals for 2021, and the trailer is currently available on IMDb.  In addition, Depth of Pyaar, which is one of Asopa’s most critically acclaimed films yet, is currently streaming on Amazon Prime.  It offers a suspenseful and thrilling plot while also incorporating themes of love and romance.  Some of the awards Asopa has received for Depth of Pyaar include Best Feature Film from the esteemed SoCal Awards in 2020, Best Director from the Aurora Awards in 2019, Best Performance from the Pacific Screen Awards, and Best Director from the Pinnacle Film awards.

Part of Asopa’s great motivation and high creative energy can be attributed to his active and wholesome lifestyle.  Asopa maintains a healthy diet, avoids harmful habits, enjoys physical activities like running, and consistently gets a full night’s sleep.  He also loves to travel and explore new places around the world.  Asopa tries to see each moment in time as a scene in a movie and the people he meets as the characters.  He carries this creative spirit and incredible passion for film with him in his everyday life. Asopa says, “The world of film and the inspiration to be a film maker has no age limit and knows no race, religion, or culture.  You just need to have a love for cinema, appreciate the art, and carry that fiery passion with you.”

As an actor, Asopa believes you should be continuously pondering and practicing the different ways to transform yourself.  Experimentation with various looks, movements, and verbal expressions promotes an actor’s dedication to such a multifaceted artform.  Asopa believes actors should try different looks in their day-to-day lives with different hairstyles, hair color, makeup, clothing, tattoos, and their presentations in how they walk and talk to add to their performances in front of the camera.  They should try looks that are 10 to 15 years younger and 10 to 15 years older to work with their versatility.  Also, to help actors become comfortable with a particular character, they should practice carrying that character’s persona throughout their daily lives and activities.

Asopa believes that camera presence is extremely important, and characters who present looks as older or younger need to be cautiously displayed in front of the camera.  The same goes for actors who are being particularly portrayed as more attractive or unattractive characters.  Asopa works in intense cooperation with his writing team, makeup team, camera team, and actors to ensure that the characters in his films exemplify the perfect representation of their intended cinematic personas.  The effects of wide-angle shots and close ups are essential to capture every subtle movement and significant action of Asopa’s characters.  The thorough research that is involved in Asopa’s story lines and films can be quite extensive.  In particular, Asopa’s films Zombie Beach, Depth of Pyaar, and Bloody Romeo have been exceptionally researched.  Asopa make it a point to dedicate vast amounts of time and attention to every aspect of his films including his characters, plot details, tones, strategic dialogue, and internal predicaments.  Asopa conveys the very nature of passion through his love of film.  He lives his life happily engulfed in this artistic world and will continue to captivate his audiences throughout the years to come.