A Westerner who confronts Western myths about China 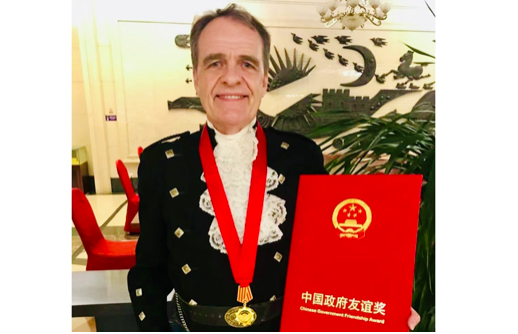 David Ferguson, a writer and editor for Foreign Language Press, receives the Friendship Award, given annually by the Chinese Government to honor outstanding foreign experts in China, on September 30 (COURTESY PHOTO)

September 30 was a big day for David Ferguson. Dressed in his kilt, the 65-year-old Scotsman received the Friendship Award, the top prize given out annually by the Chinese Government to honor outstanding foreign experts, in the Great Hall of the People in Beijing. “It was a very memorable experience,” Ferguson told Beijing Review.

Ferguson stood out from the crowd in his kilt and, after delivering a speech to award recipients, Chinese Premier Li Keqiang approached him and asked in English, “Do you come from Scotland?” Ferguson answered in Chinese, “Yes, I’m Scottish.” Having lived in China for 15 years, he can now speak a little Chinese.

From stranger to defender

Ferguson is a writer and editor with the Beijing-based Foreign Languages Press. When he was young, he traveled around the world, but China had never been on his radar. “It was just too big and too far away,” Ferguson said.

He met his Chinese wife when she was studying in the UK and the couple moved to China in 2006. “I came to China with a great ignorance of what the country was like,” he said. He thought of China as a huge, poor country with one or two outposts of modernity, such as Beijing and Shanghai, and of the people as whey-faced peasants in gray Mao suits. “My imagination was, I think, mirrored by many people in the West,” he added.

However, when Ferguson arrived in Jilin, an industrial city in northeast China’s Jilin Province and the birthplace of his wife, he discovered a reality far different from his expectations. “It was absolutely nothing like that,” he said, recalling Jilin to be a modern city and the people to be dressed in modern, fashionable clothes. “There was a lot of food and a decent standard of living.”

In early 2008, his wife found an advert for a job as an editor with China.org.cn, a Beijing-based official online portal to China. However, Ferguson originally had misgivings about becoming part of the Chinese media system and working on behalf of the Chinese Government.

The event that changed his mind was the violent riots that took place in Lhasa, Tibet Autonomous Region on March 14, 2008. “That was a big story here in China. And it was also a big story in the Western media,” he said. He read extensively, watched a lot of footage of the event, and found that he was looking at two completely different stories—the Western media story and what was actually happening. “The Western media story, bluntly, was a pack of lies,” Ferguson said. “So, I decided that at least some person should try to do whatever they could to tell a more truthful and honest story.” Approximately one month later, he became an editor with China.org.cn.

During his two years with the online portal, Ferguson covered many major events, including the Wenchuan Earthquake in Sichuan Province in 2008 and the Beijing 2008 Summer Olympic Games. “My journalism was mostly about confronting Western myths,” he said.

For example, when encountering fake news about 1.5 million Beijing residents being evicted from their homes to make way for the Olympics, he was angry. “That was probably the biggest single lie that I have ever seen,” Ferguson said. As a foreigner living in Beijing, he researched the story very carefully and wrote down what he found to be the truth.

Ferguson, however, could neither speak nor read Chinese at that time. “I did not try to paint a picture of what China was saying. I read very carefully what the Western media were saying and challenged their versions of events,” he said.

In 2010, Ferguson moved to Foreign Languages Press where he was invited to write books about Chinese cities, including Nantong and Suzhou in Jiangsu Province, and the Pearl River Delta in Guangdong Province. He visited each of these places and talked to many Chinese. “The thing that impresses me most is how kind and generous people are, wherever I go in China,” he said. During his travels, people either helped him organize his time or provided him with material.

“I always make a point whenever I’m writing a book. I confront a Western myth, challenge it and correct it,” he said. For example, many Westerners harbor misunderstandings about the Communist Party of China (CPC). “I’ve met hundreds of members and officials of the CPC and I have never met a single one who did not strike me as a kind and genuine person,” he said.

He spends quite a lot of time on Twitter arguing with people, often about China. But he finds it very difficult to convince people because they have been bombarded with negative, hostile messages about China for many years. “Criticism is going to come whatever China does. There’s a huge hill to climb,” he said, adding that this is, in a sense, a good thing, because it shows that China is actually having an impact.

In 2014, Ferguson began working as an English editor on the first volume of Xi Jinping: The Governance of China, a compilation of spoken and written works of President Xi, who is also General Secretary of the CPC Central Committee. It is an authoritative work that fully and systematically reflects Xi Jinping Thought on Socialism with Chinese Characteristics for a New Era.

As the English editor of all the three volumes, he has read them in their entirety at least five times. In his opinion, Xi Jinping Thought on Socialism with Chinese Characteristics for a New Era is a huge structure, and it starts right at the top of the Chinese dream. “It’s a window to know China. If you want to understand what Xi Jinping is talking about, you have to understand how the Chinese people think,” he said.

For non-Chinese readers who want to read the book and get to know more about China, he recommends beginning with the sections on poverty alleviation, the Belt and Road Initiative, and the anti-corruption campaign, as stories in these sections are the easiest to understand.

Over his years as an editor, Ferguson collected the mistakes made by Chinese translators and compiled them into three books, titled English, Chinglish and Wronglish. “I wrote these books to highlight the types of problem that Chinese people encounter when they’re writing or speaking English to help them delete these,” he said.

Ferguson also travels to Chinese universities and gives lectures on China’s international discourse. “I think translation and interpretation students have a very important part to play in China’s future. I really enjoy that,” he said.

In early September, Ferguson received the Special Book Award of China for his contribution to the translation and publication of Chinese books and the promotion of Chinese culture. “It’s vital that those foreigners who consider themselves friends of China should be active friends of China. They need to be doing things to help China,” Ferguson said.