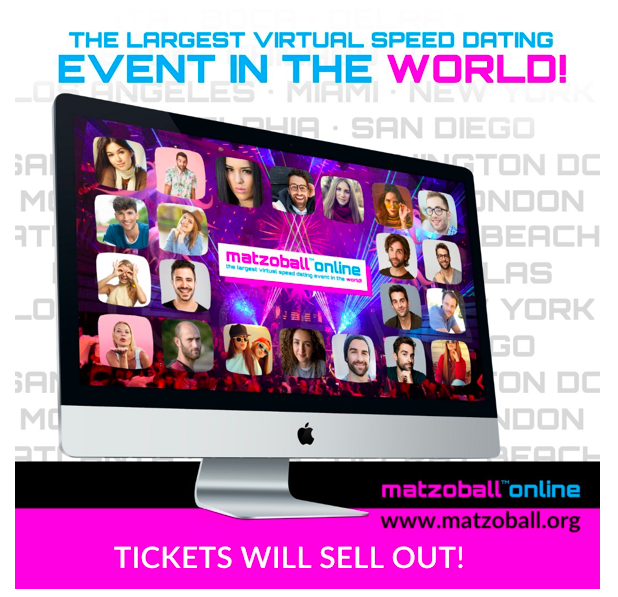 NEW YORK,– (December 21, 2020) – MATZOBALL has shattered the Guinness World Record for the largest speed dating event. The MATZOBALL Online, to be held on Christmas Eve 2020, already has people registered to participate, with many more expected to register before the event begins. The event starts at 9 p.m. on Christmas Eve and will be held virtually in 17 cities across five countries. The virtual record is the first for MATZOBALL, which has held the dating party annually since 1987.

“This event has been so well received,” explains Andrew Rudnick, from Boca Raton, Fla. “We are all excited that this will be the largest and most successful speed dating event the world has ever seen. Not only can people get an opportunity to meet their soul mate, but they can also be a fun part of making this historical record.”

The current largest speed dating event, according to Guinness World Records, took place in Dublin, Ireland, on February 14, 2014. The number of people who participated in the Valentine’s Day speed dating event was 964. The MATZOBALL Online speed dating event has already surpassed that number in terms of how many people have registered to take part. The number will continue to climb as more people register each day leading up to and on the event day.

Each year, MATZOBALL holds its famous Jewish singles holiday party, giving people a chance to meet others. Some people have met for just that one fun-filled night, while others have developed long-lasting romantic relationships and friendships. Each year, there are over 400,000 people who attend the MATZOBALL holiday party.

The MATZOBALL Online will be broken down by region and age range. Each person who registers for the speed dating will get a minimum of 20-30, 5-minute dates. During that time, they will have the opportunity to choose whom they felt they had a connection with. When there is a mutual connection shared, the two people will be notified via email 15 minutes after the event ends. This will give them an opportunity to explore the connection more.

The regional areas where the event will be taking place include:

“We are thrilled to have beaten the record for the largest speed dating event,” adds Rudnick. “We look forward to the event taking place and helping many Jewish singles come together. This is one event you don’t want to miss and this year you don’t even have to leave home to join in!”

Those who purchase a ticket to the hottest virtual party will receive a unique log-in link 24 hours before the event. They will be able to narrow their search by choosing their age and regional preferences. The event will also use fast match technology for those who feel they made a connection with someone. There will be an additional online speed dating event for professionals held on Christmas Day at 3 pm.  Space for this event is limited. For complete city information, ticket options and pricing, to purchase tickets, visit the website at: https://matzoball.org. Tickets for the LGBTQ MATZOBALL event can be purchased at: https://matzoball.ticketspice.com/lgbtq-32-45.

MATZOBALL is a yearly huge party for Jewish singles that is held every December 24th. Since the first official event of its kind in 1987, the event has been held in select cities around the nation. There have been over 400,000 people attending and it has generated over $15 million in revenue. MATZOBALL was founded by Andrew Rudnick, owner of Mazel Events, LLC. The yearly party is powered by JSwipe, the #1 Jewish dating app in the world, with users in 70 countries. To learn more about MATZOBALL, visit the site: https://matzoball.org.