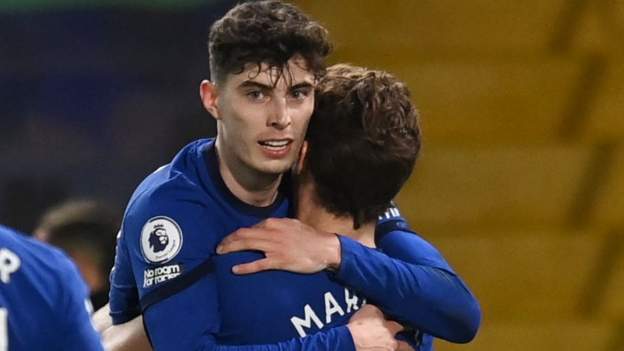 After a solid 2-0 win against Everton, Chelsea has now consolidated the PL table’s fourth spot. Moreover, Thomas Tuchel is enjoying his life at Stamford Bridge and producing masterclass every week. Chelsea looked amazingly solid since the first minute of the game. On the other hand, Everton’s hopes for a Champions League spot are now fading.

Chelsea maintained their firm possession on the ball in the first half and limited the visitors’ chances. As the game went on, Hudson-Odoi and Kai Havertz looked brilliant on the ball as well. As a result, Chelsea scored the first goal in the 31st minute. However, Kai Havertz’s shot took a big deflection from Godfrey, and the match officials recorded it as an own goal.

In the second half, everybody expected a strong Everton return. However, it was the London side who looked sharper on the ball. Kai Havertz again found the net for the second time. But, VAR denied the German’s goal as there was a hand involved during the shot. In the 64th minute, Havertz again looked lively in Everton’s box. However, this time Jordan Pickford tripped him down and a penalty was given by the referee. In the 65th minute, Jorginho didn’t miss his chance from the spot and delivered Chelsea’s second goal.

Thomas Tuchel said that his side deserved to win this match. He also admitted that the first half was a bit challenging for his side. But, the players controlled the overall game without any difficulty. Moreover, he also mentioned that it’s a pleasure to be on the sideline for such a quality club like Chelsea.

Carlo Ancelotti admitted that his team wasn’t on the same level, and they can’t play an open game against teams like Chelsea. The Italian manager also mentioned that they wanted to play as they played against Liverpool. Lastly, he added that they’re looking for a European spot. Thus, they’ll try until the last game and already looking forward to the next one.