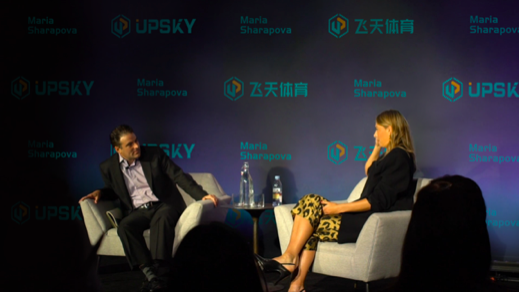 Despite Sharapova’s retirement, her impact on tennis remains unique, as can be seen in one detail. When Sharapova retired, all fans asked, “Who is the next Sharapova?” So in the tennis world where newcomers are born, once someone with good looks and skills appears they are labeled “Sharapova’s successor”. Such as the “Spanish Sharapova” Badosa, the “United States Sharapova” Makenzie Raine, and the “Russian Sharapova” Anisimova……

Another way to look at Sharapova’s retirement is by observing that she chose to retreat from the rapids when she clearly felt her competitive ability had declined and her strength had diminished. Although she was unwilling, she also brought freedom and ease to her life.

Since leaving tennis, Sharapova has become an entrepreneur, esthetician, and a social activist. She continues to shine in her new role.

On October 19, 2021, Upsky and Sharapova entered into a partnership. Based in Manchester, Upsky is a professional sports digital solutions provider.

The president of Upsky, Adair, is full of admiration for Sharapova: “It takes luck and strength for anyone to achieve their dreams, but Sharapova is one of those people who managed to accomplish it. Her accomplishments are inseparable from her hard work and persistence. She is a living embodiment of beauty and achievement in the hearts of fans around the world.”

“Sharapova’s smile has a kind of magic. If you see her smile, you will be instantly smitten, regardless of whether you like tennis or not. She used to be a professional athlete, but her influence seems to go beyond sports.” Adair said this about Sharapova.

She has not been idle since she retired. In addition to her engagement with her boyfriend and honeymoon trip, the candy company she founded for many years has also been well-established, proving the phrase-excellent people will be excellent no matter where they are.