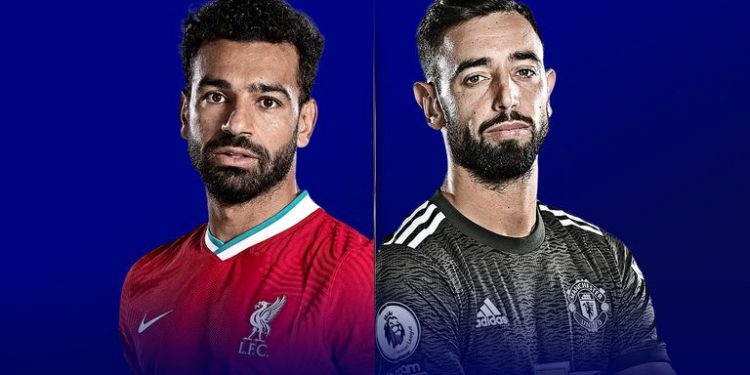 After surprising everyone, Manchester United is now sitting at the English Premier League table’s first position. However, their next match is up against last season’s champions and currently the 2nd placed team, Liverpool. Ole Gunnar Solksjaer’s team will travel to Anfield on Sunday evening to challenge Jurgen Klopp’s team.

Both Premier League sides are in great scoring form and among the highest goal-scoring teams of this season. With the help of Mohammad Salah, Liverpool has scored 37 goals in this season. However, Manchester United is not far away either as they have managed to bag 34 goals in the ongoing season. Thus, Sunday’s clash can bring many goals, especially for players like Salah, Mane, Bruno Fernandes and Rashford.

Despite conceding early in the games, Manchester’s red side has created lots of chances with Bruno Fernandes’s help. The Portuguese playmaker has already created over 53 chances and assisted 7 times. Moreover, the Red Devils team has completed 16 through balls. Thus, some quick passes from Bruno Fernandes and exchanges with Rashford are very much expected.

However, Ole Gunnar Solksjaer said that Liverpool clash might prove to be a reality check for his team even after great recent performances.

Manchester United is not the only team with a habit of conceding early goals this season. Liverpool is also on the same track as they have conceded 14 goals in the first half. However, this conceding came during the early fixtures and now they’ve managed to do a better job in defence.

The Anfield side always likes to attack from the wider areas with the help of their full-backs. Thus, along with Salah and Mane, Andy Robertson and Trent Alexander-Arnold will surely try to overlap their runs. Above all, Liverpool poses a great danger from set-pieces as well.

After a 1-0 defeat against Southampton, Liverpool will surely want to tighten their defence. Fabinho is now forced into a centre-back position, but the second defender is Jurgen Klopp’s dilemma. Last week, they pushed Henderson into the defence, but the match ended up with Merseyside’s defeat.

As for the Manchester United squad, the central defender Victor Lindelof is likely to miss out. In addition, Anthony Martial and Nemanja Matic are also among doubts.

Realistically, this match can go either way, but we predict that Liverpool might outperform the Manchester side with a score of 2-1.