Manchester United has signed up Daniel James from Swansea 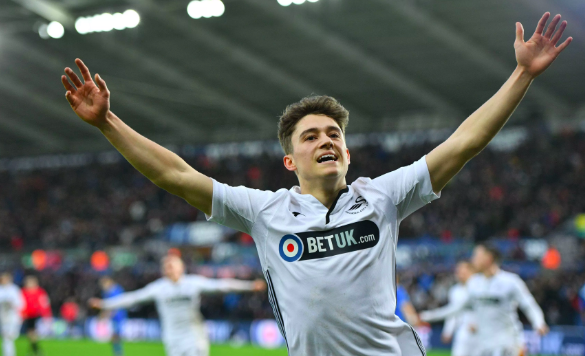 Daniel James, 21 year old Wales Winger was signed up by Manchester United for a five year contract, and extended it with the possibility of another year of the contract.

James had a good season with the Championship side where he scored 5 goals in 38 appearances across the season.

Ole Gunnar Solskjaer, the manager, announced on Manchester United’s website about the player’s addition to the team. He wrote –

“Daniel is an exciting young winger with lots of skills, vision, exceptional pace and good work ethic. He had a great season with Swansea City and has all the attributes needed to become a MANCHESTER United player.

We are delighted he had signed with our club and we are looking forward to working with him. This is the perfect environment for Daniel to continue his development.”

The player celebrated his success but is sad because he lost his father about a month ago. He wasn’t able to celebrate his achievement with his father.

James shared his feelings about getting transferred to Manchester United. The 21 year old said – “THIS is one of the best days of my life and a challenge I am really looking forward to. The Premier League is the best league in the world and MANCHESTER United is the perfect place for me to continue to develop as a player.

This is an incredibly proud moment for me and my family. However, It is tinged with sadness that my father isn’t able to share this experience with us. I am looking forward to working with Ole, meeting with the team and getting started.”

India Vs New Zealand: ICC World cup, why it is important for Kohli