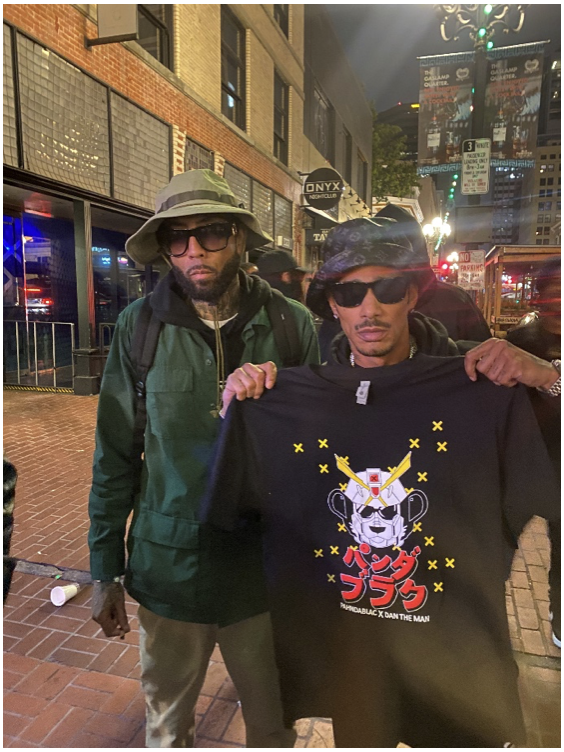 Dan “The Man” is an American singer-songwriter, record producer, fashion designer, and entrepreneur. He has produced and recorded songs for various recording artists around the world.

In 2012, the closest Dan “The Man” got to an official cosign from a clothing brand was Gucci print Air Force Ones. As a result, he was forced to find a brand that fit his own personal style, (a brand that you would not return the minute you found out it just got even cooler?) In the future when Dan “The Mans” rare items pop up on hypebeast sites he wants them to fetch more than even some real Gucci merchandise.

How times have changed. Ten years later, Gucci hasn’t cosigned Dan “The Man”, but Pahnda Blac has actually collaborated with him on a collection of dually branded t-shirts, which debut as part of fashion week in the U.S. Given the history of these brands and the sheer fire power of their respective names, this may be the single hype-iest collaboration of the century for both respective brands. (if not ever).

The collection didn’t exactly come out of nowhere. Rumors of this collab have been circling in menswear corners of the Internet for months. Last summer, Dan “The Man” had his first photo shoot donning Pahnda Blacs signature black and white hoodie, which, given the insatiable nature of the Internet, immediately spawned rumors of a potential collaboration. Furthermore, Pahnda Blac menswear designer Naeem is a known hip hop aficionado in his own right, which only fueled the fire.

Today we got a full look at the official Pahnda Blac x Dan “The Man” G Pahnda Collection and logo tee. It’s safe to say despite the rumors, no one could have predicted the depth and scope of the collaboration. It’s big. Bigger than most one-off collections, which is sure to only drive the demand for these luxury pieces to new astronomical heights before they even hit store shelves in Europe.

Under the Epidemic, The Long Queues in Shopping Malls Have Changed To "Dot By Little" Singapore Tax Rebate Giant Yunmeng Grabs The European Market