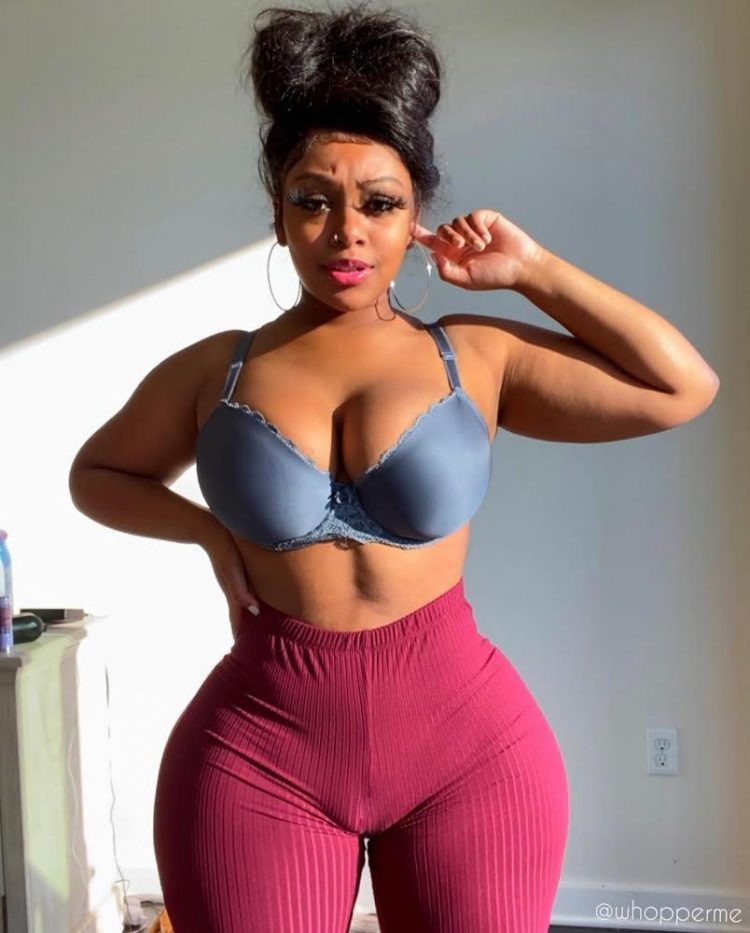 Andrea Young, who also goes by “Whopperme”, is a twenty-year-old Instagram model, whose brand started taking storm in her high school career. The curvy sensation has taken the likings of society by her genuine smile and living up to her name by having two big buns. This allowed for a pivotal switch within her life, being able to succeed by using her assets. Drea produced opportunities for further exposure in things like music videos with successors like LilBaby, Asian Doll, YellaBeezy, and more! The social media star has an impressive 1. 7 million on Instagram where she has emphasized her Whopper meat through the use of Cosplay, small skits, and other media outlets like Twitter and Tiktok. Drea is also capitalizing on her success by expanding more on her brand. She is currently in the works of launching an online adult sex store. It doesn’t stop there, Andrea recently got her feet wet in the music industry. Aside from her most recent album, she says she has a song on the way! Not only will be public be able to adore her online persona, but she will be able to develop her fandom through different avenues.

The young African American woman overcame adversity, bullying, and a toxic home environment. At a young age, Andrea was often the target of harassment by her peers, her home life was not a haven either as she was experiencing verbal and sexual abuse. After creating a social media account her senior year of high school to boost confidence and stand her ground she quickly was noticed by the Instagram community. She reached over a quarter of a million followers by the end of that very same year, and it continues to thrive. Capitalizing on her newfound success she quickly left her home and has been building a name for herself since.

Andrea can truly be seen as an inspiration to others, her ability to utilize her body in favor of her life can inspire those alike. She even continues to remain humbled after her experiences while she resides in Atlanta Georgia. It is not uncommon for the young vixen to provide aid to the homeless and donate her belongings. It is important for her to give back to people regardless of their circumstances because everyone has a story. Drea’s brand is truly to promote a positive environment and “put a smile on their face no matter the gender”. Her drive after facing adversity is something admirable and remains incorporated in the fibers of whatever paths she explores.

Although Andrea continues to climb in social status she tends to still come in contact with the hater behavior, often being envied by other Instagram models. She experiences altercations more often than none and is often blocked after being followed. This is due to her instantaneous notoriety at such a young age. Remaining humble can still be hard when others do not want to see you win, but the hard-working, positive, and the driven person strives to push most of the negativity out. She89 expressed how after being emotionally and sexually manipulated by her biological father, he would often still verbally berate her with notions she will never achieve any success. To emphasize his faith, he did not even attend her graduation ceremony. Experiencing things like that pushes her away from focusing on those minute bumps and hone on the overall goal. Truly an icon Whopperme quotes, “Do what makes you happy because you only live once. For example, stop being scared to show your body online or whatever it is you would like to do all because you are afraid of judgment. You have to do what works for you, especially if you see the opportunity come to you. Don’t pass it by, you may come to regret it depending on how it could have benefited you. Think of it like this, will it change your life? Can it help you in the long run? Could it ease the weight of the world, pay the bills? You should do what makes you happy because people are going to talk about you regardless. If that’s your way of making your money then do that. You shouldn’t stop your opportunities because of others’ judgment. There is plenty of money to go around, remain humble, and move in silence, you will eventually thank me”.

Keep your eye out for this icon as she creates multiple brands, websites, music, and builds forthe “Whopperme” empire.